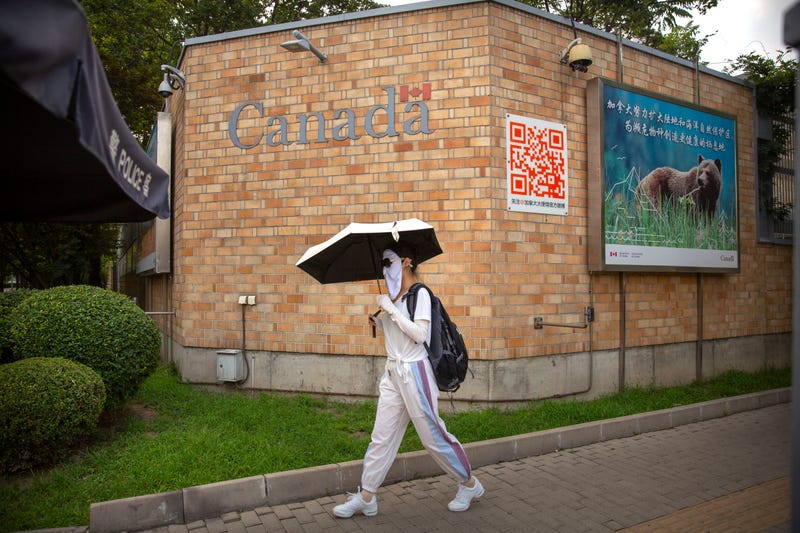 Photo credit A woman wearing a face mask to help protect against the coronavirus walks past the Canadian Embassy in Beijing, Thursday, Aug. 6, 2020. China has sentenced a Canadian citizen to death on charges of manufacturing the drug ketamine amid heightened tension between the two countries. (AP Photo/Mark Schiefelbein)
By The Associated Press

BEIJING (AP) — China has sentenced a third Canadian citizen to death on drug charges amid a steep decline in relations between the two countries.

The Guangzhou Municipal Intermediate Court announced Xu Weihong’s penalty on Thursday and said an alleged accomplice, Wen Guanxiong, had been given a life sentence.

The brief court statement gave no details but local media in the southern Chinese city at the heart of the country’s manufacturing industry said Xu and Wen had gathered ingredients and tools and began making the drug ketamine in October 2016, then stored the final product in Xu’s home in Guangzhou’s Haizhu district.

Police later confiscated more than 120 kilograms (266 pounds) of the drug from Xu's home and another address, the reports said. Ketamine is a powerful pain killer that has become popular among club goers in China and elsewhere.

Relations between China and Canada soured over the arrest of Meng Wanzhou, an executive and the daughter of the founder of Chinese tech giant Huawei, at Vancouver’s airport in late 2018. The U.S. wants her extradited to face fraud charges over the company's dealings with Iran. Her arrest infuriated Beijing, which sees her case as a political move designed to prevent China’s rise as a global technology power.

Soon after, China handed a death sentence to convicted Canadian drug smuggler Robert Schellenberg in a sudden retrial, and in April 2019, gave the death penalty to a Canadian citizen identified as Fan Wei in a multinational drug smuggling case.

China has also placed restrictions on various Canadian exports to China, including canola seed oil, in an apparent attempt to pressure Ottawa into releasing Meng.

“I would like to stress that China’s judicial authorities handle the relevant case independently in strict accordance with Chinese law and legal procedures," Wang said at a daily briefing Thursday. “This case should not inflict any impact on China-Canada relations."

Like many Asian nations, China deals out stiff penalties for manufacturing and selling illegal drugs, including the death penalty. In December 2009, Pakistani-British businessman Akmal Shaikh was executed after being convicted of smuggling heroin, despite allegations he was mentally disturbed.