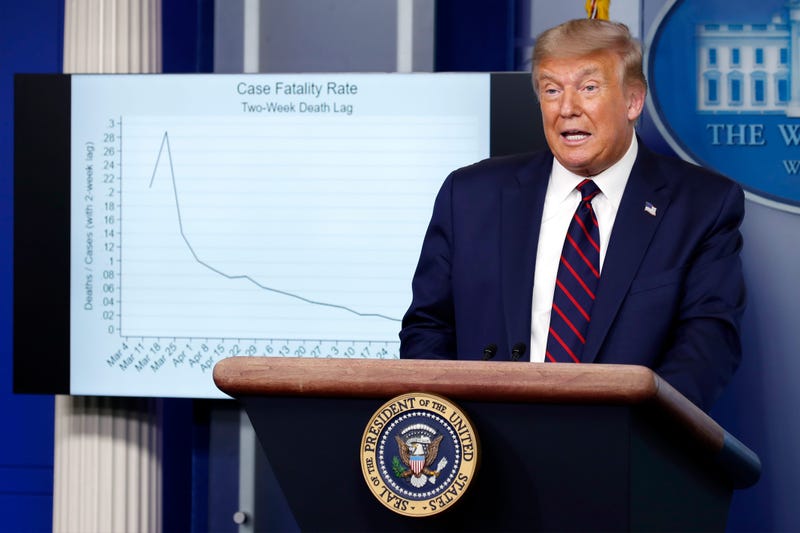 Photo credit President Donald Trump speaks during a briefing with reporters in the James Brady Press Briefing Room of the White House, Tuesday, Aug. 4, 2020, in Washington.(AP Photo/Alex Brandon)
By The Associated Press

WASHINGTON (AP) — President Donald Trump is set to host Arizona Gov. Doug Ducey at the White House on Wednesday, as he points to the state as a model for the nation for addressing “embers" of the coronavirus.

The state, like much of the Sun Belt region, began experiencing a severe spike in COVID-19 cases after the Memorial Day holiday, as states' aggressive reopening plans coincided with an increase in travel. A senior White House official said Trump planned to highlight the surge in government resources and personnel to the state once federal officials observed an uptick in Arizona's test positivity rate — a critical early warning sign of spreading infection.

The official, who spoke on the condition of anonymity to preview the president's remarks, said Trump was to highlight the state's efforts to encourage face covering and discourage indoor dining and gathering at bars as examples for other states to follow when they experience what Trump has called “embers" of the outbreak. The nation set daily records for new cases as the Sun Belt spread intensified.

The federal government also sent additional personnel to Arizona to assist medical professionals in treating cases, as well as doses of therapeutics like the anti-viral drug remdesivir.

The official said Trump would credit those efforts with a reduction in new cases, hospitalizations and mortality over the last several weeks, saying the Republican-led state, was a model for other states in managing upticks while continuing their reopening plans.