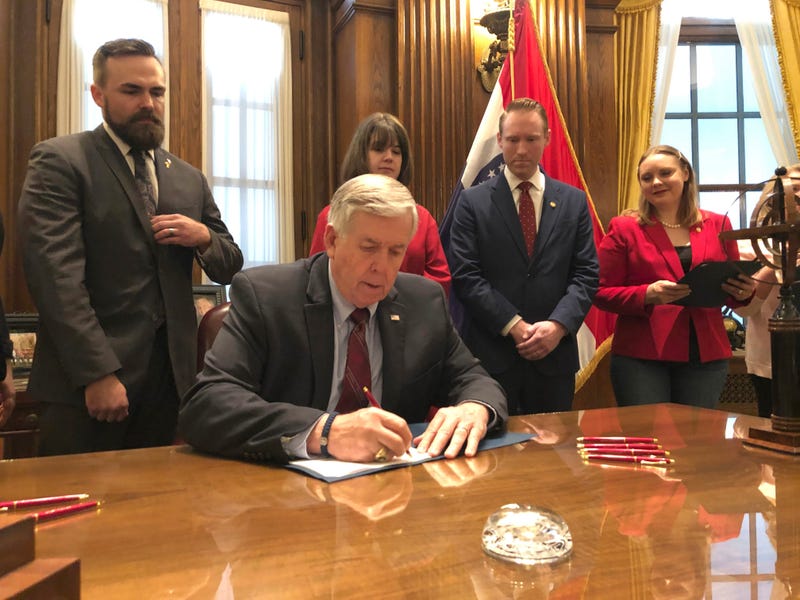 Photo credit Missouri Gov. Mike Parson signs one of the nation's most restrictive abortion bills, banning the procedure on or beyond eight weeks of pregnancy, Friday, May 24, 2019 in Jefferson City, Mo. (AP Photo by Summer Balentine)
By David Caplan , 1010 WINS

NEW YORK (1010 WINS/AP) -- Democratic presidential candidate Cory Booker has slammed Missouri Gov. Mike Parson for signing a bill on Friday that bans abortions on or beyond the eighth week of pregnancy without exceptions for cases of rape or incest, making it among the most restrictive abortion policies in the nation.

"Missouri Republican lawmakers have followed those in states like Alabama and Georgia with their own cruel bill that strips women of their constitutional rights," Booker said in a statement. "Let’s be clear about what this is: a coordinated attack aimed at controlling, dehumanizing, and criminalizing women."

He added, "This all-out assault demands that we come together with a coordinated response. It’s on all of us to speak out against these attacks and fight back alongside the women in Missouri and across the country leading this charge. I will keep fighting to protect the rights afforded by Roe and codify those protections in federal law. And on day one as president, I’ll take action to ensure that no woman sees their rights threatened like this again."

Under the Missouri law that comes into force Aug. 28, doctors who violate the eight-week cutoff could face five to 15 years in prison. Women who terminate their pregnancies cannot be prosecuted. A legal challenge is expected, although it's unclear when that might occur.

The measure includes exceptions for medical emergencies, such as when there is a risk of death or permanent physical injuries to "a major bodily function of the pregnant woman." But the lack of exceptions women who find themselves pregnant after being raped or subjected to incest has drawn sharp criticism, including from wealthy GOP donor David Humphreys, a Missouri businessman, who had urged the Republican governor to veto the bill and called it "bad public policy."

Parson defended the lack of exceptions as he spoke to a group of abortion opponents gathered Friday for the bill signing in his Capitol office.

"Is it a terrible thing that happens in those situations? Yes it is. ... But the reality of it is bad things do happen sometimes. But you have two months to decide what you're going to do with that issue, and I believe in two months you can make a decision," he said.