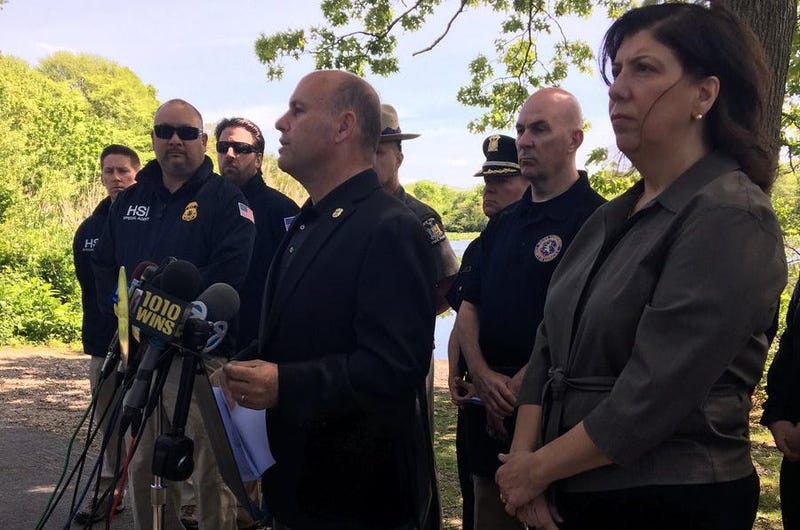 MASSAPEQUA, N.Y. (1010 WINS) – A decomposing body was found in a shallow grave at a forested park in Nassau County this week, and authorities believe the discovery could be related to the violent MS-13 gang.

Police have yet to identify the body found in Massapequa Preserve, but they believe they know who it is and say it's likely one of 11 people killed by MS-13 since 2016.

At a news conference Saturday, police said they won’t know definitively until DNA results come back, as the body has decayed over several years.

The remains were found with the help of K-9 dogs near Ocean Avenue and Lake Court on Friday afternoon.

Nassau police Commissioner Patrick Ryder and District Attorney at Massapequa Preserve where a decomposing body was found in a shallow grave. They say it could be related to the violent MS13 gang. They will know for sure once there is a positive DNA identification. #1010wins pic.twitter.com/bypUAIy7UT

After Espantzay-Gonzalez's body was discovered, authorities received information that a second body was buried in the same area of the park, and so police began to look.

Police said the 425-acre preserve is safe and that he doesn’t believe there are any other bodies buried there.

A man who was walking in the preserve Saturday morning said he feels sorry for the victims’ families. He doesn’t believe there is any risk to park visitors like himself.

“It’s certainly not going to stop me from going in, I don’t think they’re hanging out,” he said.