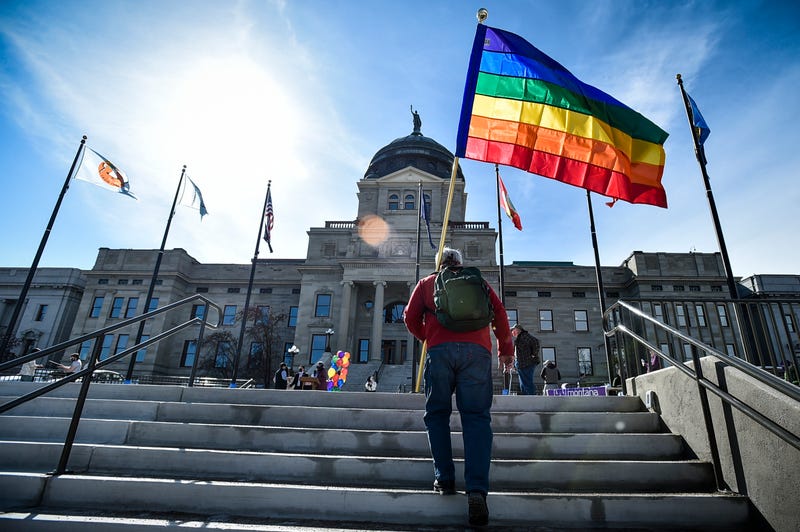 BILLINGS, Mont. (AP) — Montana Gov. Greg Gianforte's administration says transgender people can not change their birth certificates even if they undergo gender-confirmation surgery, in defiance of a court order that temporarily blocked the Republican state's bid to restrict transgender rights.

The state health department said in an emergency rule that it would no longer record the category of “gender” on people's birth certificates, replacing that category with a listing for “sex” — either male or female — that can be changed only in rare circumstances.

Sex is “immutable," according to the rule, while gender is a “social...construct" that can change over time.

“Sex is different from gender and an immutable genetic fact, which is not changeable, even by surgery,” said the rule from Public Health and Human Services director Adam Meier, a Gianforte appointee.

Only Tennessee, Oklahoma and West Virginia have similar sweeping prohibitions against changes to birth certificates, according to the civil rights group Lambda Legal. Bans in Idaho and Ohio were struck down in 2020, according to the group.

Other states also have recently sought to restrict transgender rights, including Indiana where lawmakers on Tuesday overrode their governor's veto and banned transgender females from competing in girls school sports.

The Gianforte administration's rule was issued just over a month after a state judge temporarily blocked enforcement of a new Montana law that requires transgender people to have undergone a “surgical procedure” before being allowed to change their gender on their birth certificates.

Judge Michael Moses ruled the law was unconstitutionally vague because it did not specify what procedure must be performed. The law also required transgender people to obtain a court order indicating they had a surgical procedure.

Moses’ order forced the state to revert back to a process adopted in 2017 that said transgender residents could apply to change the gender on their Montana birth certificate by filing sworn affidavits with the health department.

But state health officials said the April 21 ruling put them in “an ambiguous and uncertain situation” and led them to craft the temporary emergency rule.

The changes exceed restrictions on transgender rights imposed by the Republican-dominated state Legislature and signed into law by Gianforte.

Shawn Reagor with the Montana Human Rights Network said the rule was “politically motivated and malicious” and would harm transgender people who want to fully participate in civil society, which includes recognition of their gender.

“It's being validated and seen for who you are. But even more so, it's being able to navigate society and be active in today's world without having a threat of violence or discrimination,” Reagor said.

Democratic state lawmakers expressed outrage, calling the rule a “blatant abuse of power meant to undermine the checks and balances of our independent courts.”

“While this rule is intended to make the lives of our transgender neighbors harder, it impacts all of us by eroding the rights that let us live our lives free from government overreach,” said House Minority Leader Kim Abbott and Senate Minority Leader Jill Cohenour.

In response to questions about the new rule, the Department of Public Health and Human Services said “all individuals should be treated with dignity and respect.”

“However," the agency statement continued, “as noted in the emergency rule, the Department has an obligation to ensure the accuracy of vital records.” Officials said the rule was consistent with state law and addresses “a critical regulatory gap" while obeying the April court ruling.

But attorney Akilah Lane with the ACLU of Montana — which sued to block the state law — said the group will take the matter back to Moses' court.

“The court order could not have been more clear. The court ordered the state to go back to the status quo,” she said. “Instead, by issuing this emergency rule, they just further showed their true colors — that these laws and regulations are intended to harm transgender individuals.”

Half of the U.S. states, plus the District of Columbia, allow transgender residents to change gender designation on their birth certificates without surgical requirements or court orders, according to the policy organization Movement Advancement Project that supports transgender rights.

Just over a dozen states require surgical intervention for changing gender on birth certificates and such barriers have been challenged in several states.

Many transgender people choose not to undergo gender-confirmation surgeries. Such procedures are sometimes deemed unnecessary or too expensive, two transgender Montana residents argued in their July 2021 lawsuit challenging the Montana law.

Over the last several years, legislation in numerous states has been aimed at limiting the rights of transgender people, and the new laws are being challenged in court.

Alabama passed a law making it a felony for doctors to prescribe such treatments as gender-confirming puberty blockers and hormones to transgender minors, but a judge has blocked the law.

In Texas, Republican Gov. Greg Abbott ordered child welfare officials to i nvestigate parents of children receiving puberty blockers and other gender-confirming care as potential abuse. That effort was blocked by a judge.

At least a dozen states have recently passed laws to ban transgender girls and women from participating in female sports, most recently Utah.