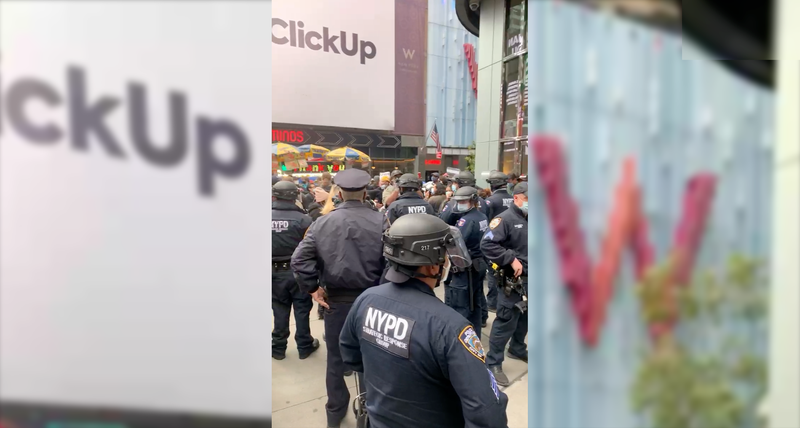 Warning: The videos below contain profanity and violence.

NEW YORK (1010 WINS) -- Clashes broke out in Times Square on Sunday as Trump supporters and counter-protesters descended on the area.

Brawl fight breaks out between MAGA and Antifacists in Times Square, New York

Trump supporters held an event Sunday, with people waving flags and driving through the area in a caravan of vehicles, according to TMZ, which reported that various groups, including the Proud Boys and Antifa, also showed up.

Videos show skirmishes, some of them violent, breaking out as police try to break up the fights.

Police told 1010 WINS that seven people—five men and two women—were arrested. Charges against them were pending.

It's unclear if anyone was seriously injured in the fights.

At one point, Rudy Giuliani rolled up in the pro-Trump caravan and was yelled at by protesters, who also tossed eggs at his vehicle, according to witnesses.

Ruddy Giuliani just rode through NYC with Trump Caravan. Trump cars got egged and flags ripped up by BLM.

Another fight broke out briefly, but was quickly broken up. Witnesses say a man in a Trump hat spontaneously started swinging.

Demonstrators and counter protesters are still gathered around the red steps in Times Square. pic.twitter.com/9OTKzv1E88

A fight broke out at the MAGA/ Proud Boys rally in Times Square. A Trump supporter can be seen swinging a baton at counter-protesters. pic.twitter.com/ZQCmzdHrhK

NYPD injured a counter-protester while arresting him. He went limp and was carried away by EMTs. pic.twitter.com/8uYvhVhnDd