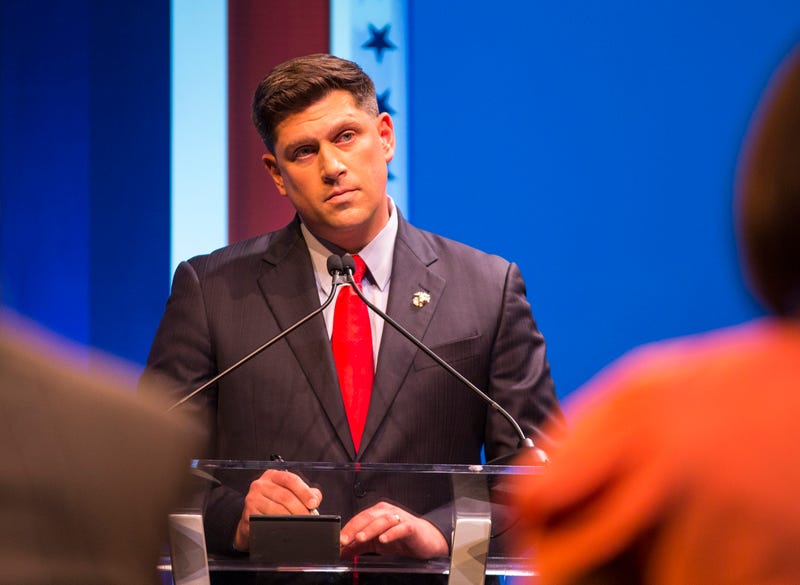 MADISON, Wis. (AP) — Kevin Nicholson, a former Marine and losing candidate for U.S. Senate who once called former Wisconsin Lt. Gov. Rebecca Kleefisch “dumb as a bag of hammers,” announced Thursday that he would be running against her for governor, shaking up the race in the key battleground state.

An expensive and bruising Republican primary would be good news for Gov. Tony Evers, who is seeking to overcome history and an expected bad year for Democrats nationwide to win a second term.

Nicholson, an outspoken backer of former President Donald Trump, is running as an anti-establishment outsider in a bid to capture conservatives who have not gotten behind Kleefisch's candidacy. Nicholson, in his first public comments on WTAQ-AM after announcing his bid, took swipes at Kleefisch, Republican Assembly Speaker Robin Vos, the state GOP party chairman and a conservative Wisconsin Supreme Court justice.

“We need people from the outside to step up and actually to fight," Nicholson said, referring to taking on a Republican “decaying machine.”

Nicholson, a business consultant, originally had his eyes set on running for U.S. Senate again after his 2018 primary loss, with his website encouraging donations to help him “take back Washington.” But when Republican Sen. Ron Johnson announced earlier this month that he would seek reelection, Nicholson pivoted to run for governor.

Kleefisch officially got in the race in September after laying the groundwork for months. She has a significant head start over Nicholson in terms of building support and banking donations. She reported raising nearly $3.4 million over three months and had $2.6 million cash on hand entering the year.

Significantly, the wife of Nicholson's biggest backer in his Senate run is behind Kleefisch. Liz Uihlein is co-founder along with her mega-donor husband Richard Uihlein of the Wisconsin-based shipping giant Uline. She donated $20,000, the most allowed under state law, to Kleefisch's campaign and another $200,000 to a super PAC backing Kleefisch.

But Richard Uilhein issued a statement on Monday saying Nicholson would have his “full support and commitment to win the primary and general elections.”

“There are very few people that can shake things up in the state; Kevin is one of them,” Richard Uihlein said in a statement.

In 2018, the Uihleins spent nearly $11 million to back Nicholson. He lost to then-state Sen. Leah Vukmir, who was then defeated in the general election by Democratic Sen. Tammy Baldwin.

There is no love lost between Nicholson and Kleefisch, who was lieutenant governor for eight years under Scott Walker. In October, after the Milwaukee Journal Sentinel reported that Kleefisch said she wanted to “hire mercenaries” and host ballot-gathering events to compete with Democrats, Nicholson said anyone who supports that idea is “as dumb as a bag of hammers.”

One of Kleefisch's backers, Vos, said last week that defeating Evers would be more difficult if Nicholson runs and he told him not to. Nicholson responded by tweeting that Vos should “focus on doing your job.”

“I think Rebecca Kleefisch is the best situated," Vos said. "She’s worked the hardest. ... I would rather focus on beating Governor Evers because our state needs a dramatic change and I feel like having a bunch of time spent arguing amongst ourselves is counterproductive to that effort.”

Nicholson was national head of the College Democrats and spoke at the 2000 Democratic National Convention. In the 2018 race, he argued that his combat experience in the U.S. Marines and work in the private sector helped lead to his conversion to the GOP.

Last year, Nicholson created the group No Better Friend, and traveled the state meeting with conservatives and preparing for a run for office.

Nicholson is the most serious Republican challenger to emerge to date to take on Kleefisch. Madison businessman and millionaire Eric Hovde, who lost a 2012 GOP primary for U.S. Senate, is also considering getting in. Several other Republicans, including lobbyist Bill McCoshen and state Rep. John Macco, thought about running but decided against it.

Evers' campaign spokesman, Sam Roecker, branded both Nicholson and Kleefisch as “divisive," saying "whoever wins the Republican primary will do everything they can to divide us and undo (Evers') progress.”