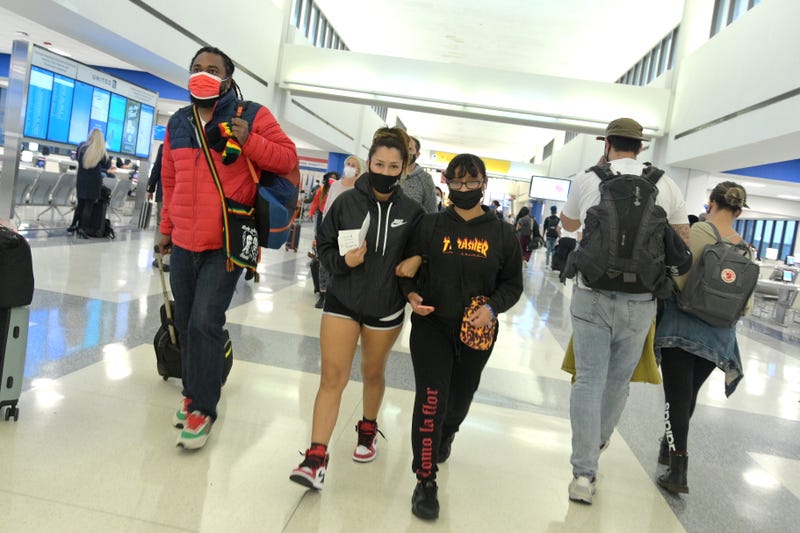 Air travelers walk towards their gates after passing through security at Newark Liberty International Airport on October 22, 2020 in Newark, New Jersey. The global pandemic has had a devastating impact on aviation and airlines don't believe they will see much improvement until a reliable COVID-19 vaccine is developed and distributed. Photo credit Michael Loccisano/Getty Images
By David Caplan

No states or U.S. territories were removed from the list, which typically applies to Connecticut, as well, but there is yet to be a formal announcement.

Murphy's office said in a statement, "Massachusetts will be included on New Jersey's advisory, but neither New York’s or Connecticut’s based on the same criteria."

But in announcing the addition of California to the travel advisory, Cuomo's office said, "Neighboring state Massachusetts now meets the criteria for the travel advisory, in addition to Connecticut, New Jersey and Pennsylvania - however, given the interconnected nature of the region and mode of transport between the states, a quarantine on these states is not practically viable."

The statement continued, "That said, New York State highly discourages, to the extent practical, non-essential travel between Connecticut, New Jersey, Massachusetts and Pennsylvania while they meet the travel advisory criteria."

Murphy said in a statement, "Cases have continued to increase at alarming rates, in our state and across the country and it is imperative that we keep the spread of COVID-19 under control. It remains our top priority to ensure the safety of New Jersey residents, and we ask individuals arriving from these 41 states to get tested for COVID-19 and self-quarantine for 14 days.”

This is the full, updated travel advisory list released by Cuomo's office on Tuesday: