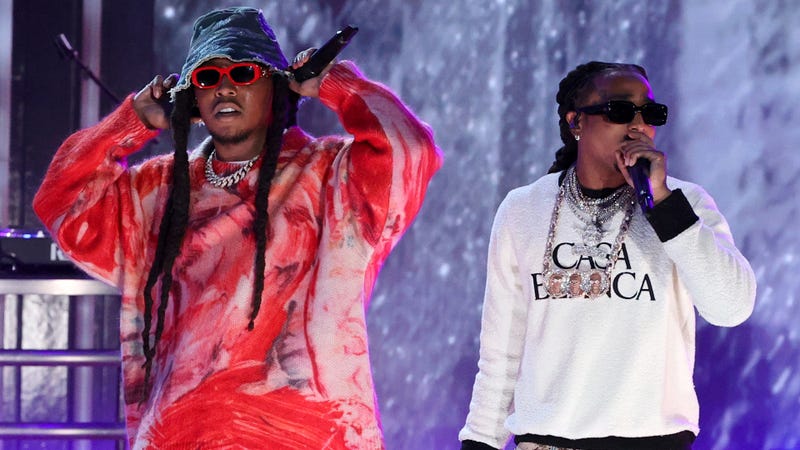 Two thirds of Migos have a new music venture for us — please acquaint yourselves with Unc and Phew.

Migos members Quavo and Takeoff, who are in fact related as uncle and nephew, which certainly explains the name, made their big debut this week with the release of “Hotel Lobby.”

As the first, as well as surprising release under this new moniker, many have begun to question if that means the end of Migos, which we’ll get to in a moment, but first let’s talk about this new content.

The Murda Beatz-produced track was accompanied by a video, helmed by Hunco Films, that gives modern-day Fear and Loathing in Las Vegas vibes.

Ahead of it’s Friday debut, the duo teased the track with the projects cover art and short trailer that got people talking in more ways than one. And as news of the single was was also shared on the Migos Instagram page, the comments section flooded with questions about the whereabouts of Offset.

This of course lead the social media sleuths to do their thang and deduce that not only is the new project sans one Migos but that both Offset and his wifey Cardi B unfollowed Quavo and Takeoff on IG, and that Quavo did the same.

It’s still unclear whether Offset’s absence is any indication of the future of the rap trio reuniting once again. But what is clear, is that Quavo has no interest in talking about it. As reported by TMZ, when the rapper was asked by a photog about reports the trio is breaking up, his response was, “Uhhhhhhh, nah,” as he looked at the camera, after what seemed like the longest pause ever.

So as for the question we posed above…. The answer is —uhhhhh, we don’t know. Either way, check out Unc and Phew's new track "Hotel Lobby" above.