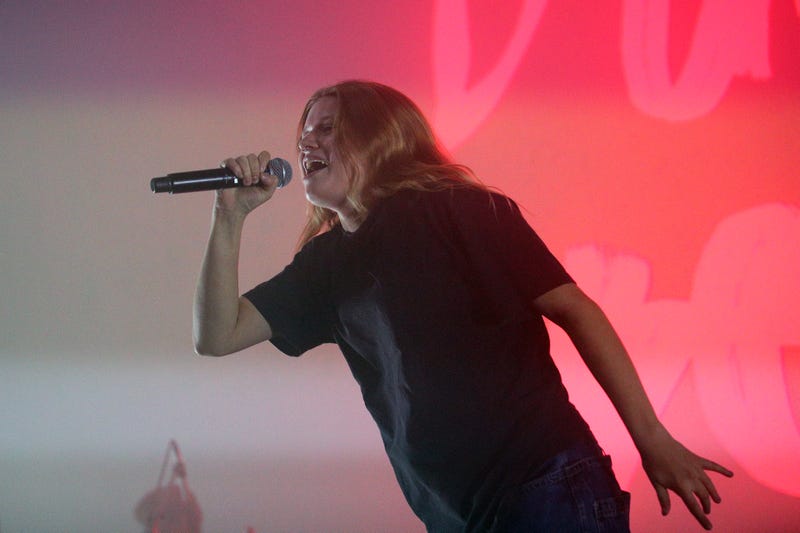 At age 14, Norwegian native, Marie Ulven, better known as girl in red, began cutting through all the internet noise and clutter and uploading her own music to YouTube. By the time she turned 18, the singer started seeing glimmers of success with her 2018, bedroom pop-inspired track “I wanna be your girlfriend.”

Now 1.69 million YouTube subscribers later, girl in red is at the precipice of Alt Queen stardom as fans await the release of her debut album if i could make it go quiet and as they consume the singer’s newest single “Serotonin.”

At first, Ulven tells RADIO.COM, “I think I’ve just been really lucky,” but then quickly pivots to explain, “At the end of the day maybe I haven’t been lucky, at the end of the day I’m not trying to be a social persona… I kind of just want to live off music.”

The artist who was clad in a perfectly over-sized sweatshirt and a Spiderman beanie conveys that authenticity is the name of her game and that her ability to be candid and so forward in her music stems from wanting to write lyrics that lay it all out on the table. “I don’t really connect with lyrics that I don’t feel have some sense of honesty in them,” notes girl in red.

In Marie’s lyrics, listeners are given the chance to understand the inner workings of the singer’s mind whether she is singing about her own mental health experiences or yearning for everything from true love to late-night hook-ups. When she approaches a new song the artist says, “I think like when I write a song I’m usually over it, like whatever I’m writing about because then it’s a lot easier to look at it from like ‘oh okay that was the entire situation' and also have a better perspective of how I am now… it’s easier to reflect on things when they’re done.”

“Serotonin” which serves as a masterful introduction to what fans can expect from if I could make it go quiet, is also a blossoming of thoughts pouring right out of Ulven’s brain and into our ears. The track personifies the artist’s ability to get up close and personal with her listeners and weave the nitty-gritty details of her mental health experiences into a big, bold, and beautiful song jammed packed with twists and turns.

Technically, this song has been in the works for Marie since she was 12-years-old. “My dad was in a car accident when I was 12 and that like f*****d me up completely, and that like triggered so much s*** for me,” girl in red begins to explain. “That has stuck around pretty much up until now and I went to therapy and I learned a lot about intrusive thoughts and OCD… and I learned that a thought is just a thought. And I think learning when your mind makes you think or what your mind makes you think you want to do… isn’t necessarily always real.”

Coming to terms with understanding intrusive thoughts allowed Ulven to realize that she was not alone in her mental health tribulations, and coming to terms with how to navigate those thoughts brought us to what we now hear on “Serotonin.” While she can’t completely pinpoint the moment where she decided to process her intrusive thoughts lyrically, Marie shares, “it sort of like poured out of me last summer. The first ‘rap part’ that I call it, just came out of me really quickly, and then the second one took a little bit longer to get out because… obviously I wanted something that meant a lot to me.”

While Marie can be credited with the melody and lyrics that feel like we are getting a tour of her brain, FINNEAS stepped in to assist Ulven on the production of the song. The two collaborated to build a fitting sonic feeling after girl in red “felt a little bit stuck… I had the rap part, and I had the chorus but I felt like I needed a new head and a set of fresh ears.”

“We sent it to FINNEAS and he was really excited when he heard the song and he seemed genuinely stoked about the rap part.” After back and forth between the two artists and various zoom calls Ulven landed on what we hear now.

In the future, if girl in red collaborates with any artists going forward, whether FINNEAS or some of her favorite musicians like Phoebe Bridgers or Taylor Swift she wants it to be in person. “A lot of energy gets lost in translation,” notes the “Rue” singer. However, at this point, Marie enjoys working alone. With grace and honesty, just as she conveys in her music, Ulven says, “right now I’m not sure if I’m in the right headspace for like duets and stuff, or like those types of collabs. But I definitely want to get there and be able to let someone in, like in that part of making a song…. when it's other people writing and singing that’s like something different.”

With three singles already out for if i could make it go quiet, girl in red is gearing up for the debut of her first studio album, and quite frankly at this point in time, this feels like the next natural step in her musical progression. “I’ve been working on this album for a long time now, and it couldn’t come out sooner in my opinion, I’m just really really stoked for it to come out because I think it’s like my best work so far,” Marie ecstatically affirms.

For Ulven, when listeners take in the new album, she wants fans to exhume their own experiences from her feelings that are spun into melodic stories. if i could make it go quiet is a body of work that demonstrates that Marie “has grown as a musician.”

The name of the album comes from lyrics on one of the upcoming tracks. “I just feel like it’s such a statement sentence because it’s like ‘if I could make it go quiet’ but then it’s like this album full of stuff, and things and things I want to say,” muses girl in red. She continues to tell us, that the last track on the LP, which is called ‘it would feel like this’, serves as an answer to her big initial declaration, “if i could make it go quiet.”