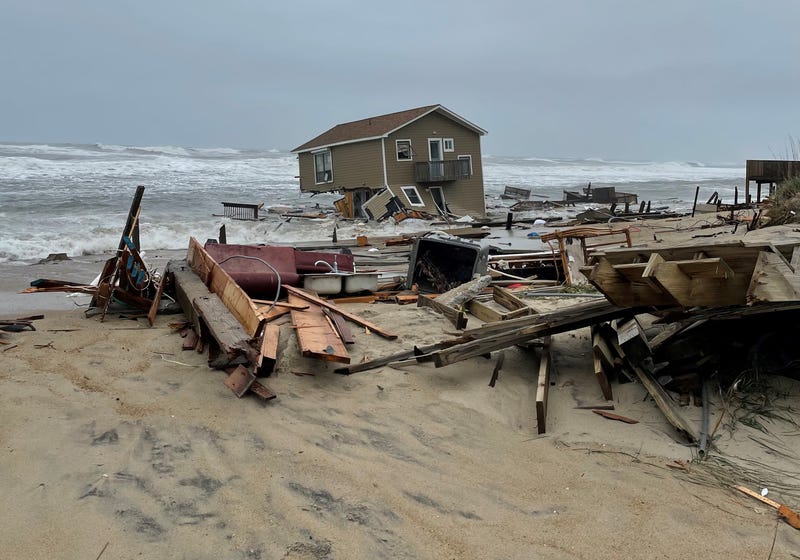 Two beach houses collapsed and fell into the waves along North Carolina's coast, according to the U.S. National Park Service.

The two unoccupied homes were located along Ocean Drive in the Outer Banks community of Rodanthe. Both collapsed into the ocean on Tuesday, the NPS said.

Cameras were rolling when the second house fell into the water. Footage of the collapse was posted online by officials at Cape Hatteras National Seashore.

Cape Hatteras National Seashore (Seashore) has confirmed that an unoccupied house at 24265 Ocean Drive, Rodanthe, N.C. collapsed this afternoon. This is the second unoccupied house collapse of the day at the Seashore. Read more: https://t.co/ZPUiklQAWA pic.twitter.com/OMoPNCpbzk

The first collapse wasn't captured on video, but the NPS did share photos of the aftermath.

Posted by Cape Hatteras National Seashore on Tuesday, May 10, 2022

Crews immediately started working to clean up as much debris as possible before it gets washed away. The NPS said visitors should be cautious when using the beach and ocean along Hatteras Island because debris is spreading widely along the shore.

This is actually the third time a home has fallen into the surf this year. Another house in Rodanthe collapsed into the water in February.

"The debris from this house spread across many miles of beaches before the homeowner, and volunteers in an organized beach cleanup event, were able to remove much of it," the NPS said in a statement. "Clean up efforts for smaller pieces of debris related to the Feb. 9 house collapse continues."

The beach has been closed along all of Ocean Drive in Rodanthe to protect the public from hazards associated with the collapsed homes. Visitors are cautioned to stay away, especially because officials don't know when the next collapse is going to happen.

"Unfortunately, there may be more houses that collapse onto Seashore beaches in the near future," David Hallac, superintendent of the National Parks of Eastern North Carolina, said in a statement. "We proactively reached out to homeowners along Ocean Drive in Rodanthe after the first house collapse and recommended that actions be taken to prevent collapse and impacts to Cape Hatteras National Seashore."