Blizzard had snow much at Point Defiance Zoo & Aquarium in Tacoma.

A 25-year-old polar bear named Blizzard awoke one morning to news of a snow day!

His exhibit was covered in a thick blanket of snow following a recent snowfall.
While some may view the snow as hassle, the senior bear wasted no time throwing himself into the thick of things.

In adorable footage shared by the zoo, the bear began by making “bear angels.”

He snuggled up to the snow before flipping on his back and rolling around to ensure every spot has been covered by the fluffy powder.

According to the zoo, Blizzard is partial to the snow as he was rescued as an orphaned cub in Churchill, Canada.

“He’d been separated from his mother on the Arctic tundra and had no chance of survival in the wild, so we were happy to provide him with a wonderful home,” the zoo wrote. 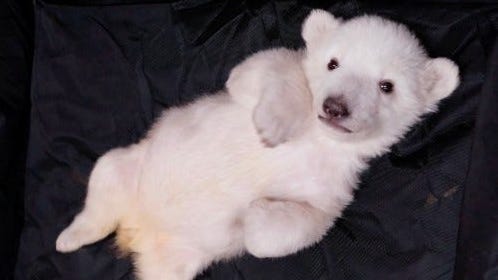 Blizzard is known for his playful side as evidenced in the video.

When he isn’t enjoying the winter weather, his favorite pastimes include swimming in his pool, keeping an eye on visitors through his widow, and plays with enrichment balls and toys from his keepers.

Standing at ten feet tall, it’s probably best that Blizzard wasn’t in the mood for a snowball fight.