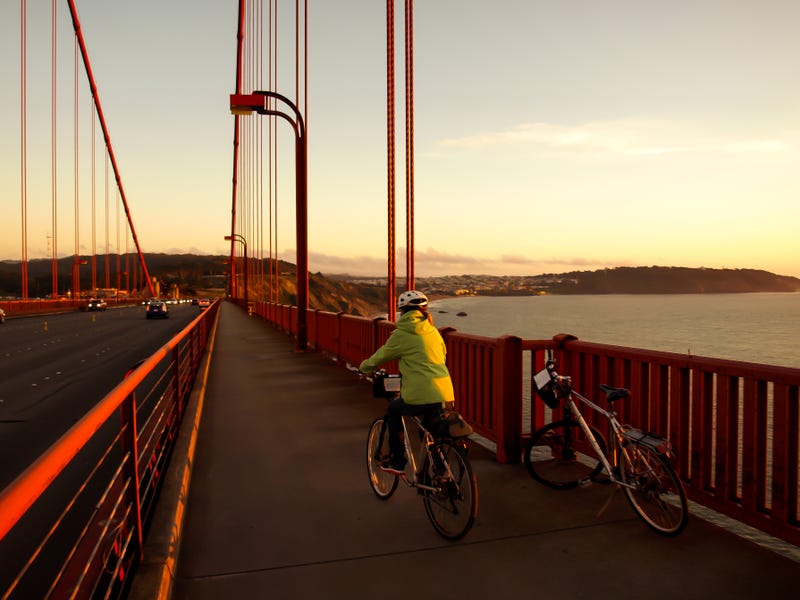 Bicycle riders on the Golden Gate Bridge will soon have to adhere to a speed limit of 15 mph. Photo credit Getty Images
By Natalia Gurevich, KCBS Radio

Up until now, bicyclists have been unfettered by restrictions while traversing San Francisco's Golden Gate Bridge.

But starting Jan. 1, 2022, those that cross the bridge on their bikes will have to ride at a pace of 15 mph or less, according to reporting by the Marin Independent Journal.

The new guidelines were passed during a Nov. 18 meeting by the Golden Gate Bridge, Highway and Transportation District Board of Directors. Speed demons that exceed the new limit could face fines from $238 up to $490.

It's the increasing presence of electric bikes on the bridge added to the need for a speed limit, although cycling crashes have long been an issue on the bridge.

"The hope is that social norms and peer pressure and just the notion that we do have an established speed limit will have the effect of calming traffic on the sidewalk," said Steven Miller, bridge division deputy general manager in an interview with the paper.

The California Highway Patrol will enforce the new speed limit and issue tickets as needed.

CHP officers on bicycles have been posted to the bridge, for suicide prevention. "This is still very, very new so there are definitely aspects of it that are continuing to be discussed," said CHP Officer Andrew Barclay in an interview with the paper.

Signs and sidewalk markers declaring the new speed limit will be installed by Jan. 1.