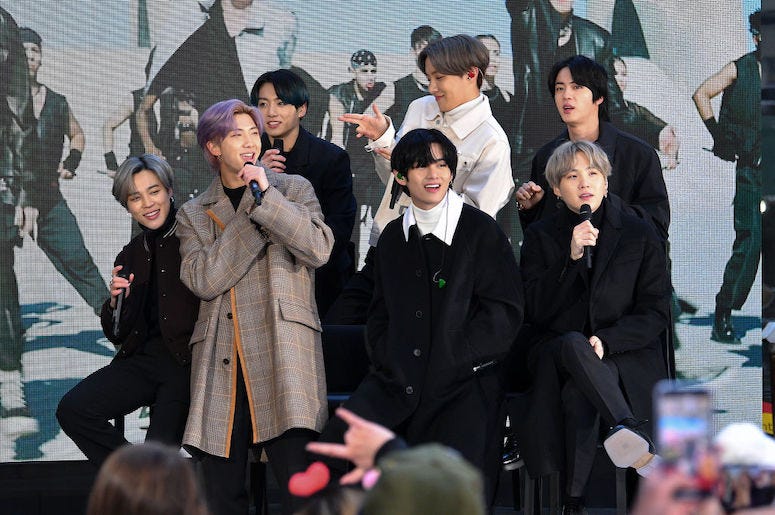 BTS lived up to the hype at their MTV Unplugged special paying tribute to the musicians that came before them all while putting their own touch on the iconic series.

"It's really an honor to be a part of the 'MTV Unplugged' legacy, where so many legends have performed," RM told viewers at the beginning of the program. "We're definitely thankful, honored we got to be a part of this."

BTS became the latest group to take part in the iconic MTV Unplugged series and lived up to their promise of delivering a new spin on fan favorites.

The performance saw BTS utilize numerous different settings and outfits during their performance. Unlike a traditional BTS performance with a high level of production and extensive choreography, viewers were treated to a stripped down environment that let the vocal talents of each member shine through.

Although he didn’t have it during the Unplugged special, last night also marked the debut of a new look for Jungkook as he shared a selfie showing off his brand new hair. ARMY are all about his new look as they reacted with immense excitement on social media.

BTS also treated viewers to a gorgeous cover of the Coldplay track “Fix You” that served as a highlight of the show.

All lined up in a row seated atop a stool, each member of BTS had the opportunity to sing a verse solo before they all joined in unison with one another.

The MTV Unplugged performance also marked the return to the stage for Suga, who had been sidelined since November after undergoing shoulder surgery.

"It's been a while since I've been on stage, and I missed it a lot while I was recovering," Suga said during the performance. "It feels good to be performing together. I'm very happy.”