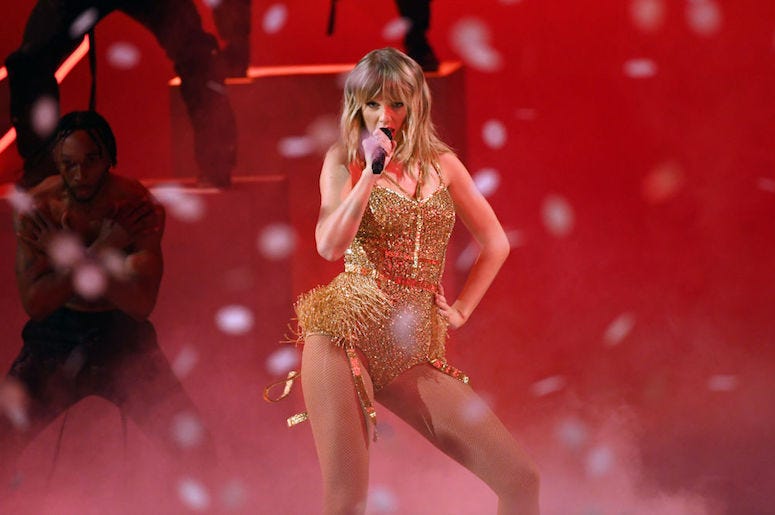 If there is one thing Taylor Swift loves to do, it’s surprising her fans.

If there is a second thing Taylor Swift loves to do it’s leaving clues to retroactively show fans that they weren’t surprises at all.

This morning on Good Morning America, Taylor announced that the first release from her re-recording endeavors would drop tonight. The first re-recorded single is “Love Story” which we already got a snippet of via a Match.com commercial directed by and starring confirmed Swift bff Ryan Reynolds.

While we are beyond excited to hear the new version (aptly called “Taylor’s Version”) in full, we immediately went from Swiftie to Sherlock as soon as Tay posted on Instagram.

In a heartwarming message to fans on Instagram, a Swiftie with a well-trained eye probably noticed that Taylor brought back her signature secret messages. By capitalizing random letters, the message spells out APRIL NINTH. This was confirmed to be the release date of the full re-recorded version of Fearless featuring a whopping 26 songs. That means she re-recorded all 19 tracks from the platinum edition of the album, added on a single for the movie Valentine’s Day that she co-starred in in 2010 and appeared on the setlist of her Fearless tour AND 6 new songs from the era that never made the original album.

People are probably wondering why she is starting with Fearless and not her self-titled debut. We have a few theories on that. First off, Fearless is the most awarded Country album of all time, which seems like a pretty good place to start, especially since Taylor has recently gone back to her country roots with songs off her latest releases folklore and evermore. “Love Story” is also one of Taylor’s most successful songs, so why not start with a heavy hitter! It is pretty apt that the single drops on Valentine’s Day weekend, when she was in the movie Valentine’s Day in 2010.

But our biggest theory as to why Tay is releasing Fearless first?

The album turns 13 this year.

We don’t know how it gets better than this.