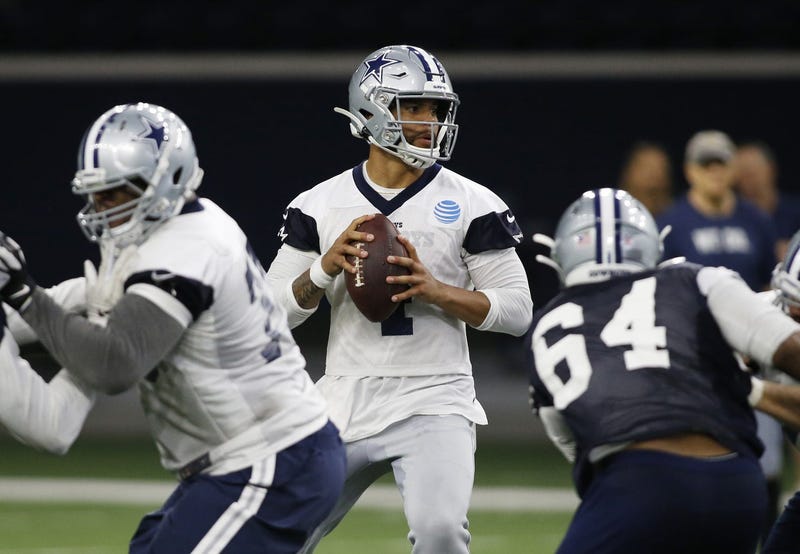 DALLAS (105.3 The Fan) - "The Playmaker" Michael Irvin joined Shan and RJ this morning to discuss Clarence Hill of the Fort Worth Star-Telegram's report that Dak Prescott's agent has “broached” a deal in the range of $34 million per year.
There's a report out that Dak is asking for $34 million, where would you go with Prescott?

"Every minute you wait, it's costing money. This is an asset that’s trending in the right direction. You got to pay him this money. Dak’s agents aren’t gonna let you come in under Carson Wentz," Irvin said. “If they don’t pay Dak, we can all pack it up and go home. It’s over. How are you going to get anything out of the other guys if they’re seeing that you aren’t taking care of the top guy? Why should I give you all I got? You got to be smart about this, and this is a no-brainer.”

"When you look at numbers, a lot of it is about the market. .. (But) I come in and prove myself to guys in this locker room. .. It'll get done eventually," Prescott said via 105.3 The Fan's Mike Fisher.

ALERT: Dak Prescott says his representatives have made a counter-proposal in contract talks with #Cowboys ... 'When you look at numbers, a lot of it is about the market. .. (But) I come in and prove myself to guys in this locker room. .. It'll get done eventually.' pic.twitter.com/e7RTy3Cko9

Prescott added that he "can't really say" how close they are to reaching an agreement since he's letting his agent handle the negotiations.

Fish reported the week prior that the Cowboys were making progress in their negotiations with Prescott. Around that same time, Prescott spoke on the negotiations at the team's Reliant Home Run Derby at Frisco's Dr. Pepper Ballpark and didn't appear to have any concerns about where things stood.

“I want to be a Cowboy forever,” Prescott said. “I think the people that are doing the deal feel the same way. So to me, it’s no rush. I know it will get done.”

The Cowboys have given every indication that they plan on making Prescott their franchise quarterback, and likely highest-paid player in team history. Fish initially believed that Prescott would earn around $30 million annually, which would put him in the upper-echelon of the highest-paid quarterbacks in the NFL. But that was before Carson Wentz received his record-breaking four-year, $128 million contract.

Listen to the entire interview with Irving below: