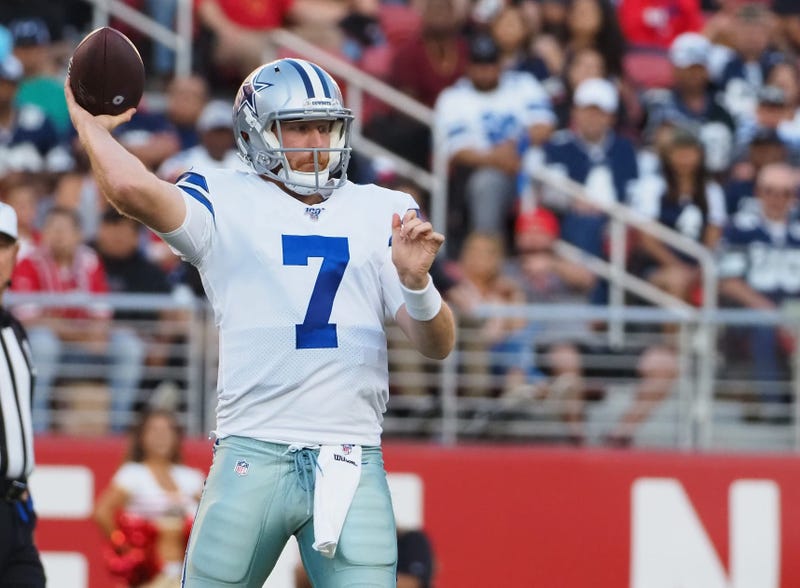 SANTA CLARA, Calif. (105.3 The Fan) - On the surface and at first blush, Dallas Cowboys QB coach Jon Kitna’s evaluation of how the training camp media too-harshly evaluates his QBs comes off as ... well, harsh.

“The media is evaluating practices,” Kitna said, (but) you have no idea the things that we’re working on out there.”

He’s got a fine point. There are intricacies and nuances during a practice that the layman it is not qualified to detect.

So ... Does my admission also carry over to a real live preseason NFL game?

Niners 17, Cowboys 9 in Saturday’s preseason opener at San Jose did some things, I bet, to pacify those who wonder of first-teamer Dak Prescott is a $30-million-a-year talent and maybe even did something to satisfy those of us who wonder if Cooper Rush and Mike White are acceptable backups.

No, Dallas didn’t win the game (that matters not) and emerged mostly unscathed (that matters a lot). And props are due a handful of guys who performed well here, including the Cowboys’ sub-loaded first-team D.

You needed to see answers here. And yeah, you saw some.

Prescott played on the opening drive only, and engineered a nine-play drive that featured some tempo, his 4-of-4 passing, and rookie Tony Pollard starting in Zeke's spot. Dallas settled for a field goal, but along the way there was "Dakcuracy,'' including on a deep throw to Michael Gallup that earned the Cowboys an interference call.

Dak even caught his own pass on a deflected throw, and lived to joke about it.

“I just wanted to show everybody I can catch,” he said with a laugh. “Show off the hands and just get down.”

Rush subbed for Dak on the second possession and before halftime, he too orchestrated the Cowboys down the field with a series of "let-'er-rip'' over-the-middle throws. The first drive ended with another Brett Maher field goal (yay!) the second with a Maher miss (oh-oh).

And then a crisp possession to close the half, Rush showing some cool, some mobility and some am strength to push Dallas to a 12-play, 59-yard drive in 1:41, culminated by a Maher make (yay!).

“We were obviously disappointed in the third kick (missed field goal),'' coach Jason Garrett said. "The other ones seemed to be pretty good. So we’ll keep evaluating him, we’ll keep giving him shots. But he’s been a good kicker for us.”

In the end, the undrafted young vet Rush finished 16-of-26 for 142 yards. He got some help from receiver Cedrick Wilson, could've used some help from rookie Jon'Vea Johnson, and set up tight end Blake Jarwin to be a weapon-who-almost-was.

Said Rush: “It’s a lot of fun. ... we moved the ball and got a lot of chunk plays. You just wish you could’ve punched it into the end zone.”

Then came third-stringer Mike White, and his inglorious start: A sack-strip-fumble (not all of his fault, then negated by a flag) on his very first snap. Ah, and that start featured a sequel when with 7 minutes left and the game still within reach, White was pressured and fumbled again, this time with no ref rescue.

But this exhibition game was a step up from Oxnard. And for all that was decent here, the lack of TDs means that as the preseason progresses, Prescott, Rush and White all need to step it up, too.