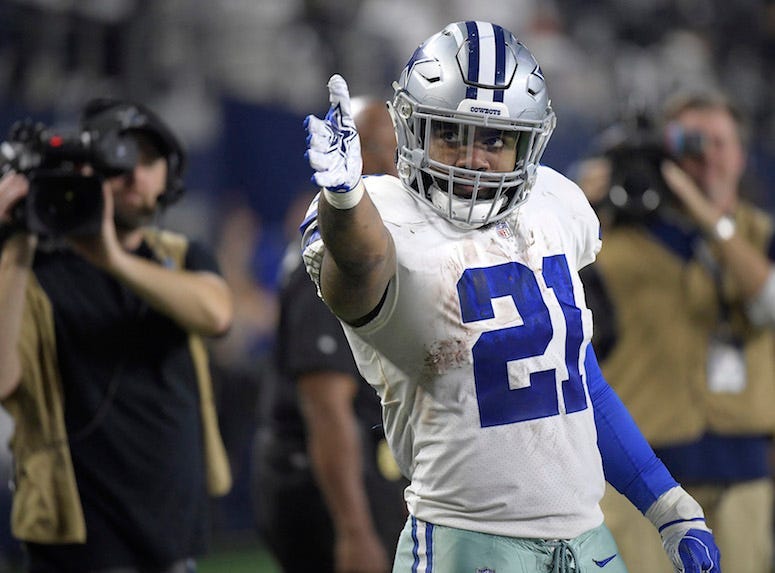 I may be one of the only people in DFW that wants to keep Ezekiel Elliott around, but I also understand the economics of football.

So I’m not going to sit here and explain and fight for reasons to overpay a running back for a team that has a multitude of big money decisions to make currently on its platter.

Though the production is fantastic, in 40 games he’s given the Cowboys 4,048 rushing yards and 28 touchdowns along with 1,199 receiving yards and another 6 TD’s in the air.

His targets in the air went up in his third season and he caught 81% of his passes while being the main focus of the offense until Amari Cooper came along. Even still, the Cowboys masterminds knew they wanted to feature Zeke first and let the passing game evolve from there.

The body of work is already there and I can’t say I’ve ever heard a complaint come from the guy.

I will say the current turnaround in personality is working in his favor in a major way, and that is going to be his key moving forward.  Whether his future is with the Cowboys or another team, his attitude and work ethic will stand out in making him a next level potential Hall of Fame running back.

All of the greats seem to have had an uncompromising work ethic that never nagged them. Zeke is showing up to voluntary workouts and looks like he’s in the best shape of his life despite what national criticizers say. The work he puts in to prepare his body is simply the price of admission into the upper tier.

The next level stuff is the off the field. People may say they don’t care what these guys do off the field, but a large portion of the NFL fan base really does love the stories of humans that comes along with the player.

He isn’t getting into any trouble that we know of, and the party animal we heard about is now doing it in public with the rest of DFW. Watching him at the Stars games is a brilliant PR move and one I know many former Cowboys loved to be part of as I sat next to Daryl Johnston, Tony Casillas and Chad Hennings at many Stars games growing up in the Cowboys heyday.

During his suspension season, many accused Zeke of being childish, selfish and entitled for not speaking about his situation. I couldn’t blame the guy for wanting to keep legal stuff private and not wanting to lash out at the NFL for what he thought was an unjust suspension.

A dark cloud hung over him and we didn’t get to see the personality that came along with the “Feed Zeke” slogan. However, what we’re seeing this offseason, what we saw last year is a guy coming into his own as a leader and potentially an elite member of the NFL. He’s smiling, laughing, loving life and as we saw him talk to a kid who was hit with a puck at the Stars playoff game he’s endearing himself to the community more than ever before.

Is it all a play for a big contract here or elsewhere, I don’t think that’s the sole reason.  I think he looks at the impact he can make on his community and he’s starting grow up and mature and realizes the legacy he can leave behind if he plays all of his cards right. I mean, look at what Roger Staubach, Troy Aikman, Emmitt Smith and Michael Irvin have created simply by growing up in the brightness of the Cowboys Star.

So for right now, Zeke shouldn’t worry about the contract or his future, just keep doing what he’s doing and everybody will take note of the man and the production that comes along with him. ​