DALLAS (105.3 The Fan) - The Dallas Cowboys suffered yet another crushing and disappointing playoff loss on Sunday, falling to the San Francisco 49ers 23-17 in frustrating fashion at AT&T Stadium.

And when asked about his job security by the media, McCarthy, to his credit, was unphased, telling reporters that he was not concerned about his future, and that he was proud of his players.

“I don’t have any concerns," McCarthy said. "I’m proud to be standing here today. I’m proud of my football team.”

Cowboys owner Jerry Jones, however, did not necessarily share that same sentiment, refusing to discuss the future of McCarthy one way or the other.

“I don’t even want to discuss anything like that at this particular time,” Said Jones. “That’s not on the table. The game speaks for itself.”

McCarthy, who is just in his second season with the Cowboys, has had his issues with game management on the field, but was still able to lead the Cowboys to a 12-5 overall record and a division title this season. 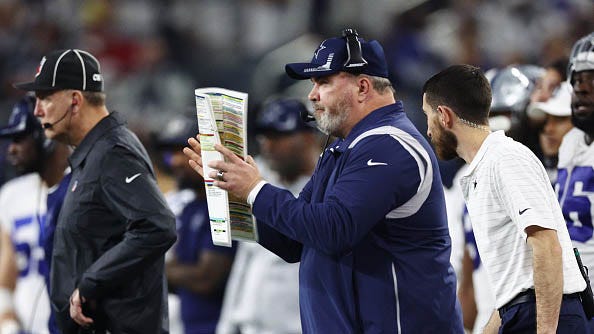 Ref, Mike McCarthy both get blamed for crucial delay of game penalty in Cowboys-Niners

However, McCarthy was far from alone in Dallas's success in 2021, with coordinators Dan Quinn and Kellen Moore both major factors in the team's success.

So much so, that both Quinn and Moore are currently top candidates to fill one of the many new head coaching vacancies across the league, meaning that the Cowboys staff could very well look much different in 2022.

For his career in Dallas, McCarthy is 18-15 overall, after a disappointing 6-10 record in his first season with the franchise.