The Dallas Cowboys had their best showing of the season on Sunday Night Football with a 54-19 win at home, including a 33-point fourth quarter. Granted, it was against the Indianapolis Colts, but this Cowboys team looks like the real deal.

The Cowboys are now 9-3 on the season and 5-1 in their last six games. Dallas shouldn't slow down anytime soon either with games against the Texans and Jaguars in the next two weeks.

However, there’s an aura around The Cowboys that doesn’t let many people truly believe in them.

Andrew Fillipponi and Danny Parkins of the Audacy Original Podcast “1st & Pod” talked about how the Cowboys are perceived and if they should be considered true Super Bowl contenders this season.

“If they did not have their history and if they did not have their baggage, they would be, I think, a team that people were putting Super Bowl expectations on,” Fillipponi said (6:00 in player above). “But the people that do that just do that because they want a reaction. They don’t actually mean it, they just say it because they know that it’s a polarizing thing that people are going to put it out there and they’re going to get a reaction to it.”

Sure, there are going to be people that say things just to say things, but perhaps that shouldn’t be the case with this particular Cowboys team.

“You can take the numbers and twist them in a way that make the Cowboys look like a real bonafide Super Bowl contender,” Fillipponi continued. “But it’s just every time I say that there’s just something that grabs a hold of me and shakes me up and tells me ‘Dude, like, they’re the Cowboys. They don’t ever deliver in big games.’ And that’s the conundrum.”

The Cowboys have the 11th-most yards per game in the league, including the seventh-most rushing yards on average. Only the Chiefs, Eagles, and Bills are averaging more points per game than the Cowboys – and it’s a close margin.

The defensive side of things is where Dallas really shines. They allow the fifth-fewest yards per game overall, second-fewest passing yards per game (just 1.3 yards more than the Eagles), and the third-fewest points per game.

A team with those numbers should be considered a real Super Bowl threat, but Dallas’ playoff inefficiencies make people doubt the Cowboys. Since winning their third Super Bowl in four years in the 1995 season, the Cowboys are just 4-11 in the playoffs. They have won just two playoff games since 2009.

Parkins brought up a good point that this Cowboys team feels like it’s built to win in January, but Fillipponi’s counterpoint was also a good one: so was last year’s team that lost a home Wild Card game.

The Cowboys do have the formula to be a winning team, though.

“A running game should travel on the road and a pass rush should travel. So they should be a very high-floor Wild Card team. There shouldn’t be many scenarios where they get blown out,” Parkins said. “Good takeaway team. Good pass rush team. Good run-the-ball team. But there’s just something about Mike McCarthy and Dak, honestly, to a lesser extent, that makes them hard to believe in.”

The Cowboys have those two easier matchups on the docket before hosting the NFL-best Eagles on Christmas Eve. Philadelphia improved to 11-1 on the season with a blowout win on Sunday, but after that, the NFC is wide open – especially given the injury to Jimmy Garoppolo in San Francisco.

Dallas looks like it belongs, but it’s going to take more than a strong regular season to make people truly believe in the Cowboys as a Super Bowl contender. 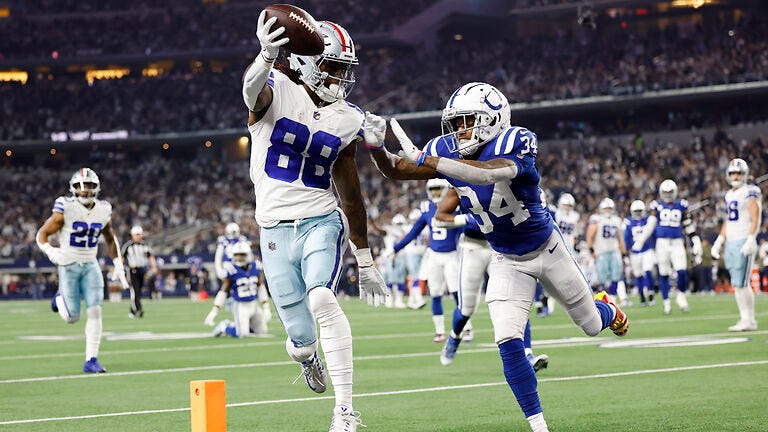