Not all losses are created equal. Some hurt much more than others. For Cowboys fans, Sunday’s Wild Card loss to San Francisco is going to sting.

Trailing 23-17, a 49ers punt kept the Cowboys alive with Dallas needing to navigate 80 yards—albeit with no timeouts—in 32 seconds. Dallas ate up 39 yards in three plays before quarterback Dak Prescott ran forward for 17 yards, failing to stop the clock as the Cowboys’ season ticked down to zero. Prescott tried desperately to get back to the line of scrimmage, but he was too late.

Even for the Cowboys—no strangers to heartbreak—Sunday’s ending was particularly catastrophic, a chaotic conclusion to one of the wildest games in recent memory. This was a uniquely Dallas way to lose with the Cowboys coming up short in spite of the Niners doing all they could to give the game away, committing a pair of costly turnovers in the fourth quarter while shooting themselves in the foot with head-scratching penalties (none bigger than their false start on fourth-and-inches). But San Francisco would prevail, benefiting from Prescott’s inexplicable decision to tuck-and-run with Dallas’ season hanging in the balance.

The play generated a swift and decidedly harsh response on Twitter, with fans critical of Prescott and coach Mike McCarthy, both of whom will have some serious explaining to do in their post-game media interactions.

Dak in the clutch pic.twitter.com/4HAGBtkYFE

Dak Prescott: “There’s 10 seconds left and we have no timeouts, I’m gonna go run for a first down in bounds” #SFvsDAL pic.twitter.com/r0m6SqDYBU

they had time for 2 Hail Marys

I was wrong. Running the ball with 14 seconds left and no timeouts was the perfect ending for the Cowboys. https://t.co/01K4KbRYUV

GAME ON THE LINE

You cannot keep the HC after that

There’s no guarantee Dallas would have won had Prescott managed to step out of bounds or thrown it away to preserve what little time was left. Hail Maries, after all, are rarely converted (laterals tend to be even less successful). But the Cowboys, thanks to Prescott or whoever’s ill-advised decision it was to execute a running play with 14 seconds and no timeouts remaining, weren't even given that opportunity.

With Dallas eliminated, the 49ers will travel to Green Bay for next week’s Divisional Round in a rematch of the 2019 NFC title game. The NFL has yet to determine a date and time for that matchup, though next weekend’s schedule should be finalized soon, depending on the outcome of the final two Wild Card games (Pittsburgh at Kansas City and Arizona at Los Angeles Monday night). 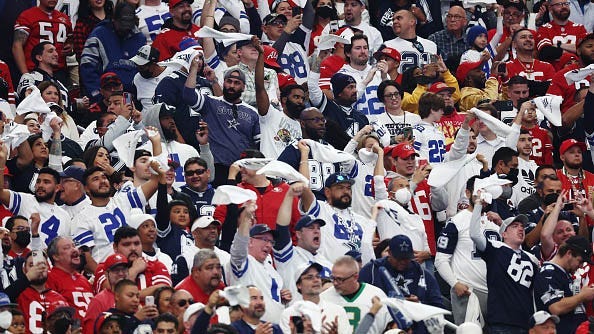