Michael Irvin saw it coming, but the Cowboys’ loss to the 49ers on Sunday still stings.

Last week on his appearance with 95.7 The Game’s “Damon & Ratto”, Irvin said the 49ers had "all the kryptonite” to take down his beloved Cowboys. It didn’t play out like we envisioned, but San Francisco ended Dallas’ season for the second straight year with a gritty 19-12 victory.

During his appearance with Damon Bruce and Ray Ratto on Monday, Irvin was still mourning the end of another disappointing season.

“Trust me, this has not been an easy thing,” Irvin said. "I don’t know why, man. I keep telling myself, ‘Why do you invest so much? Why does this bother you?’ After the game I have to go to sleep, but I feel suppressed, oppressed, depressed – any pressed you put on it – but I just have to lay down. I still really haven’t came out of it. I’m not lying when I say this – whole heartedly I say this – but if we’re gonna lose, losing to San Fran gives me something.”

Dallas still hasn’t been to an NFC Championship since Irvin’s prime in the 1994 season. On Sunday, their season came to an end on a bizarre play, as veteran running back Ezekiel Elliott lined up as an ineligible center, while linemen were spread out wide. Dak Prescott threw a high pass to KaVontae Turpin in the left flat and he was quickly decked by Jimmie Ward as the clock expired.

It was a head-scratcher, for sure, and gave Irvin flashbacks to 2022. Last year in the NFC Wild Card round, Prescott scrambled down the middle of the field before sliding and making the clock run out, as the Cowboys couldn’t get a snap off in time.

“I can’t even talk about that, I was so pissed. Just take a knee and concede. What are you doing? Just take a damn knee.”

“I can’t even talk about that, I was so pissed at seeing that right,” Irvin said. “Just take a knee and concede. What are you doing? The last two plays of playoff losses in a historic rivalry between Dallas and San Francisco, look at the plays Dallas is trying to run at the end of each of those games. Just take a damn knee.”

Elliott got bowled over by 49ers linebacker Azeez Al-Shaair in what could have been an unceremonious end to his Cowboys career. The 27-year-old signed a six-year, $90 million extension in 2019 but Dallas can save $10.9 million by trading or releasing him after June 1 this year, according to Spotrac. Tony Pollard got injured Sunday but he’s expected to recover in a few months, and his emergence as a 1,000-yard rusher this year could make Elliott expendable.

Irvin thinks it’s a shame that the final botched play could be Elliott’s last one with Dallas, where he has played 109 games since 2016.

“As much as Zeke has given this franchise, that shouldn’t be the last damn play Zeke plays, when he got ran over as a center,” Irvin said. “You know what I’m saying? I don’t want to see that be the last sight that we see of Ezekiel Elliott if he’s not on the team next year.” 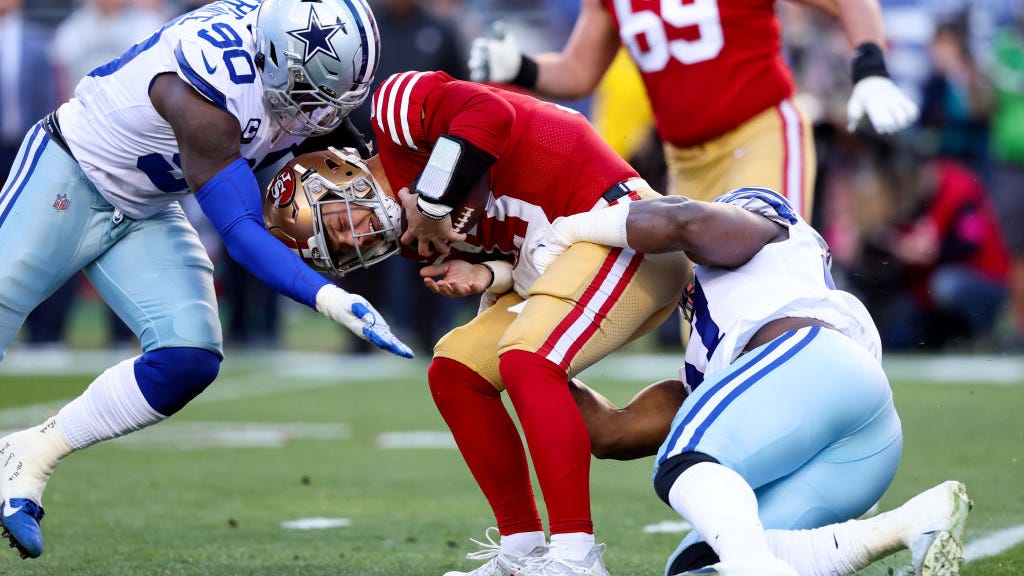