“I see for him to be a full participant. It’s still a projection. We’ll see how it goes. Obviously, we’ll watch it," coach Mike McCarthy said at the 'State of the Cowboys' press conference.

Prescott, who underwent multiple surgeries on his injured ankle, has yet to participate in 11-on-11 drills this offseason but will do so in training camp.

McCarthy's comments match up with what we've been told regarding the quarterback's status over the past few months. He told the media in June that he didn't expect his star quarterback to have any limitations when camp opened.

"He hasn't missed anything that's been slated. He's doing a lot of extra, frankly, so the anticipation would be for him to go every day is the outlook," McCarthy said. "We're not naive. It's just like any player that comes back from injury, especially a major joint injury. The first year back, there's going to be some things you have to work through, but I would anticipate we'd start with him in full mode, get him into the team periods and get back to playing football."

As for Prescott, he's believed for a long time that he would be ready to go for the team's first practice in Oxnard.

“I’m not being limited or restricted to doing anything," Prescott said in an interview during team OTAs in late May. "I’m ready to go. I don’t know as far as being tackled or my ankle being jerked and stuff under a pile, obviously we’re not there yet. But we’re far from being there, so I’m good to go really.” 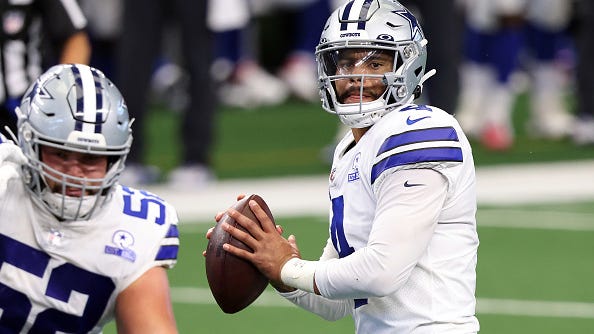 Dak Prescott: 2021 season will be 'very, very special' for Cowboys