DALLAS (105.3 The Fan) - On the day the NFL announced that the Tampa Bay Buccaneers would play host to the Dallas Cowboys to open the 2021 season, Tom Brady made it pretty clear that he's not very fond of the moniker 'America's Team' being associated with the Cowboys.

“9/9 Can’t come soon enough . . . excited to open against ‘America’s Team,'” Brady posted on Instagram, with a photo of himself celebrating and the Wandavision wink gif attached. 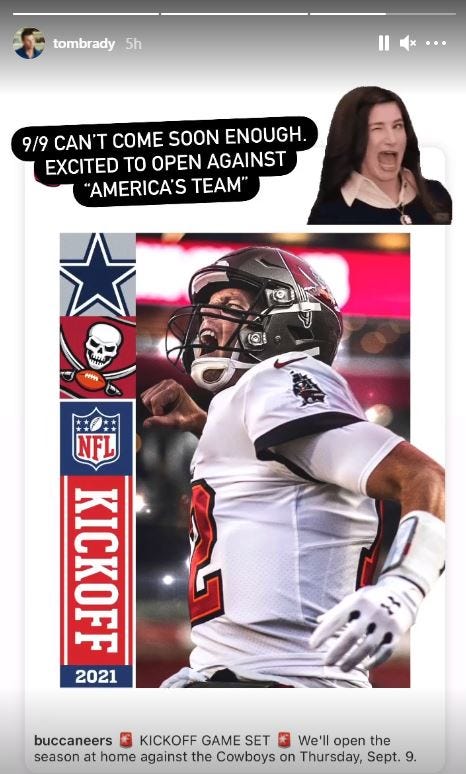 Brady is now the second star quarterback to take issue with the Cowboys' nickname within the last year.

In the week leading up the Cowboys matchup vs Pittsburgh last year, Ben Roethlisberger said he was just fine with the Cowboys being called 'America's Team' because his Steelers were something bigger.

“If you didn’t know who America’s Team was, you should’ve seen the stands and all the Terrible Towels,” said Roethlisberger. “Dallas may be America’s Team but we’ll be the World’s Team because we got fans everywhere and they’re the best in the world.”

Brady has a right to say whatever he wants, seeing as he has won seven of the 10 Super Bowls he has played in. But the reality is that Dallas was given the nickname back in 1978 by Bob Ryan of NFL Films. At that time, the Cowboys were one of the premier franchises in football, having made the Super Bowl five times in the '70s, which resulted in two championships in 1972 and 1978.

We get the point he's trying to make, though. It's not his fault that the Cowboys have been anything but a juggernaut throughout his 21-year tenure in the NFL. Dallas hasn't made it to the Super Bowl or even advanced past the divisional round of the playoffs in the last 25 years.