It's not hyperbolic to say that the Week 3 matchup between the Kansas City Chiefs and Baltimore Ravens may be the most important game of the regular season.

A season ago, the Ravens went 14-2, and led by eventual NFL MVP Lamar Jackson, entered the postseason with the No. 1 seed in the playoffs. Of course, they didn't make good on it, allowing 2018 NFL MVP Patrick Mahomes and the Kansas City Chiefs to win two home playoff games, before defeating the San Francisco 49ers in Super Bowl LIV.

Not only do the two teams appear to be the best in the AFC again in 2020, but perhaps the two best in the sport. The only difference is under the NFL's new postseason rules, only the No. 1 seed in the conference will receive a first-round bye in the playoffs. That makes securing the top seed more important than ever, and arguably makes this the most important game either team will play this season.

Both the Chiefs and Ravens have jumped out to 2-0 starts again, and will meet on Monday Night Football this week in Baltimore to determine what team is the favorite to win Super Bowl LV.

While you can probably guess where the Chiefs and Ravens are, here are our latest RADIO.COM NFL Power Rankings: 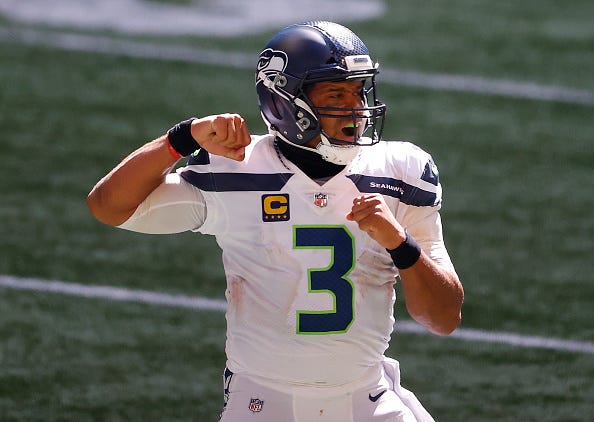 Russell Wilson is off to a quick start in 2020. Photo credit (Kevin C. Cox/Getty Images)

We're far from the first to make this observation, but it's impossible to gloss over - Russell Wilson looks like he's sick of hearing about how he's never received a first-place MVP vote. After finishing runner-up to Lamar Jackson a season ago, Wilson has been other-worldly through the first two weeks of the 2020 season, tossing nine touchdowns to just one interception. Even the one interception - a pick-six in Week 2 - wasn't Wilson's fault, but instead a tip-drill created by Greg Olsen not catching a pass he normally hauls in. Not only is Wilson the early MVP favorite, but the Seahawks appear to have moved to the top of the pack in the NFC. 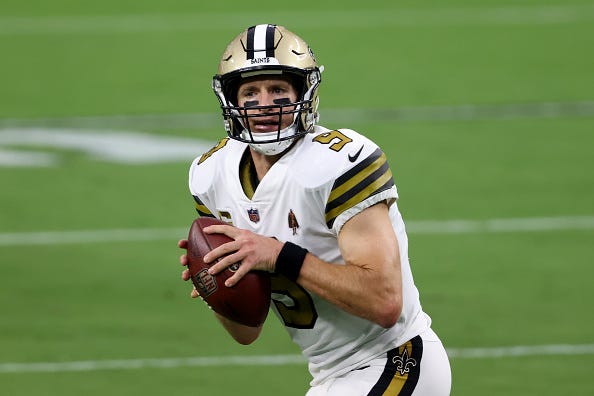 How Much Does Drew Brees Have Left?

We're not going to rush to judgement on the Saints after a Week 2 loss on Monday Night Football in Las Vegas. However, it isn't concerning that over the first two weeks of the season, Drew Brees is in the bottom-10 in terms of yards per pass attempt. As we've seen over the past couple seasons - Sean Payton can scheme the Saints to regular season victories even with a diminished Brees. However, come postseason, the Saints will need the ability of Brees to consistently go deep if he needs to. At age 41, it's unclear if he's capable of doing that anymore. That leaves you with the feeling that the Saints may have a ceiling in the postseason. 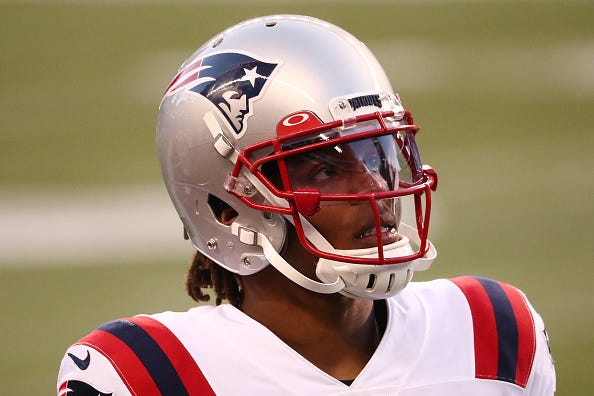 Even though they were ultimately denied what would have been the game-winning touchdown, it's impossible to ignore how great Cam Newton looked in the team's Week 2 loss to the Seattle Seahawks. Despite Russell Wilson tossing five touchdowns, the Patriots were only a few yards away from escaping Seattle with a win. Newton not only threw for 397 yards, but he led the team with 47 rushing yards, including two touchdown scampers. If the Patriots are able to acquire a No. 1 wide receiver before the trade deadline, they could be dangerous in the AFC playoffs. 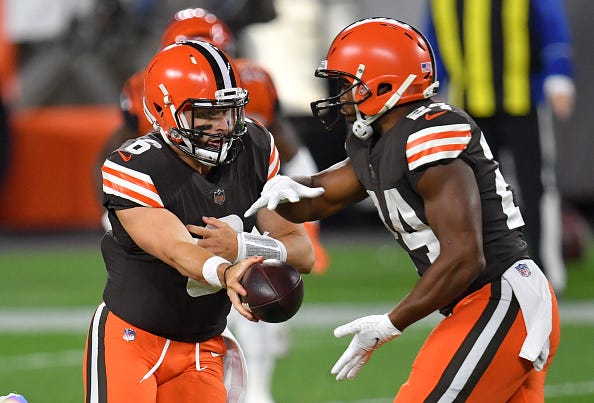 Browns Find The Formula in Week 2

Not only did the Browns bounce back after a blowout loss in Week 1, but in their Week 2 victory over the Cincinnati Bengals, Kevin Stefanski laid out a blueprint for the team to be a postseason contender. With arguably two of the 10 best running backs in the sport, the Browns gashed the Bengals for over 200 yards on the ground, with both Nick Chubb and Kareem Hunt scoring. Baker Mayfield got out of the pocket and involved Odell Beckham Jr., who averaged 18.5 yards per catch. Perhaps it was just false hope, but the Browns have the talent on their roster to be a postseason team. We'll see, with 10 days to prepare, if they can keep things rolling at home against the Washington Football Team in Week 3. 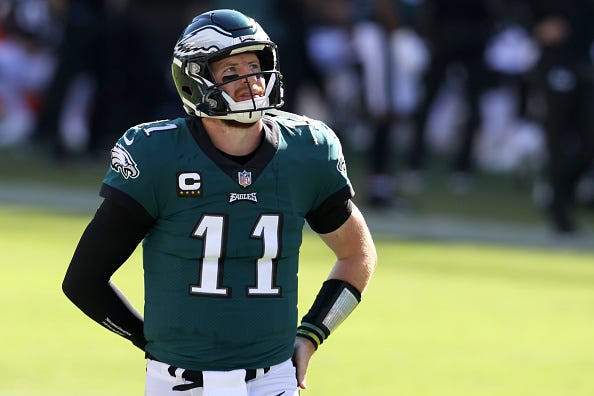 Carson Wentz and the Eagles are off to an 0-2 start. Photo credit (Rob Carr/Getty Images)

It's only Week 3, but it's fair to say that the defending NFC East Champion Eagles are already on the ropes. Carson Wentz and company have lost to the Washington Football Team and Los Angeles Rams in the first two weeks of the season, and have a -28 point differential in 2020. Theoretically, they should be able to break into the win column against Joe Burrow and the Cincinnati Bengals in Week 3, though that perhaps shouldn't be taken for granted. Even if they are able to win, it has to be convincing, not just one bad team beating an even worse season. After the Eagles face the Bengals in Week 3, they'll head to San Francisco in Week 4, Pittsburgh in Week 5 and return home to host the Baltimore Ravens in Week 6. Even with an additional playoff spot in 2020, the Eagles are looking squarely at the possibility of being out of the playoff race by mid-October. 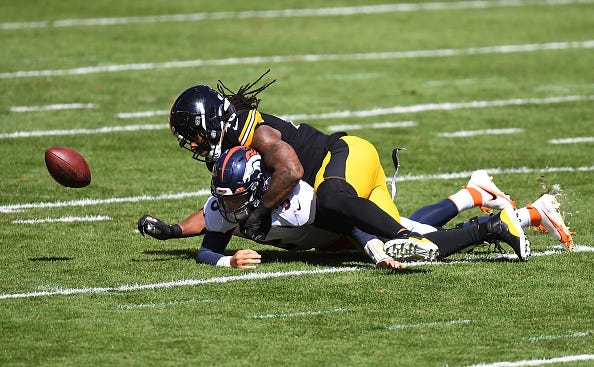 Broncos Among Teams Off to Miserable Starts

The Jets and Giants have perhaps moved to the forefront of the Trevor Lawrence watch, but that's not especially shocking. However, for the Broncos to have started 0-2, given that they were a trendy postseason pick, is jarring. The scary part in Denver is that 2020 is already starting to feel like a lost season. Von Miller is likely out for the season after suffering an ankle injury. Emerging star wide receiver Courtland Sutton is out for the season after tearing his ACL in Week 2. Drew Lock likely will miss a couple weeks with a sprained AC joint in his right shoulder. Perhaps expectations for the team got out of hand ahead of the season, but to this point, the Broncos have been the team most affected by major injuries.