The specially constructed “Field of Dreams” stadium and site is looking snazzy ahead of the White Sox-Yankees matchup on Aug. 12 in Dyersville, Iowa.

MLB released a series of photos Thursday, and the stadium looks about ready to go.

We're exactly three weeks away from the Field of Dreams game. 😍 pic.twitter.com/ZPUborZXki

The stadium – built next to where the famous 1989 movie was filmed – will seat around 8,000 people for a contest that was originally scheduled for 2020 but was delayed due to the pandemic. The game will mark the first MLB regular-season contest ever played in Iowa.

White Sox closer Liam Hendriks has campaigned for the stars of "Fields of Dreams" to come to the game, saying he'd love to see Kevin Costner, James Earl Jones and Ray Liotta there.

Below is another aerial photo, courtesy of the Des Moines Register and USA Today photo wire. 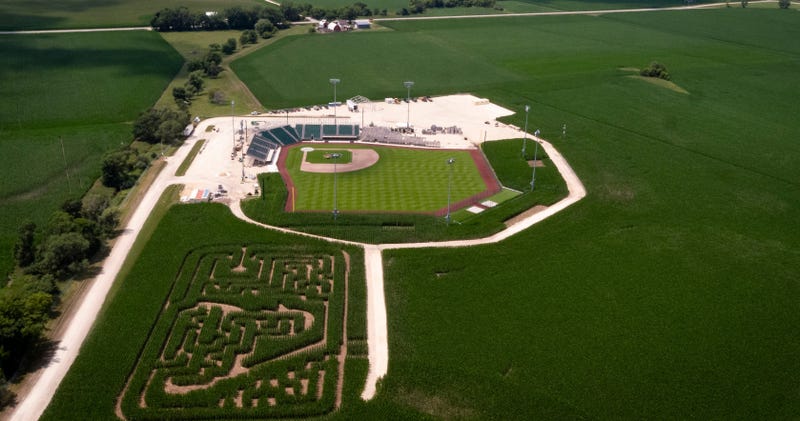 A corn maze made to look like the MLB logo sits between a new stadium (pictured) built on the "Field of Dreams" site and the iconic field carved into a cornfield. Photo credit Kelsey Kremer via Imagn Content Services, LLC