The Giants’ playoff run came to an end this weekend with a disappointing loss to the Eagles. While the season ended with a thud, there were quite a few positive takeaways for the Giants.

Brian Daboll is one of the favorites for Coach of the Year after a 9-7-1 season and an improbable playoff win. Perhaps even more surprisingly, Daniel Jones finally lived up to his potential after the Giants declined his fifth-year option before the season.

Jones’ future with the Giants now takes center stage after a successful season. He could look to build on that in New York or go to the open market in hopes of a bigger payday.

Danny Parkins and Andrew Fillipponi of the Audacy Original Podcast “1st & Pod” talked about Jones’ future in New York and if he’d play hardball with the Giants after they declined his option.

“Wouldn’t there be a part of you that’s like ‘Eff this team. They didn’t pick up my option,’” Fillipponi said (6:26 in player above). “I would feel that way.”

“Yeah, I would feel that way, too,” Parkins agreed. “I don’t know how much hardball he’ll play because they can franchise tag him. That would be a huge win for him. The franchise tag for Daniel Jones would be way more lucrative than the fifth-year option.”

The 2023 quarterback franchise tag projects to be around $45 million. Jones’ fifth-year option that the Giants declined was half of that at $22.3 million. But if Jones does decide to play hardball, the Giants may not have a choice.

“My point is, Danny, if you don’t franchise tag him he’s going to have the rest of the quarterback-needy teams bidding on him,” Fillipponi said. “I just wonder at an open market if there’s going to be a team or teams that think ‘You know what? Yeah, the coaches made him a lot better but also look at the lack of weapons that were around him. A guy that got waived by Buffalo midseason was his best receiver.’”

Saquon Barkley, whose own future is a topic of discussion as well, was the only real weapon for the Giants this season. Isaiah Hodgins, Darius Slayton, and Richie James all came out of nowhere to form a solid receiving trio for Jones.

“He passed my eye test, and I know that the Vikings' defense stinks and the Colts' defense stinks and Philadelphia was a lot better and he did not make many plays in that game,” Fillipponi said. “He just looks a lot better than he did the last few years where he fumbled the ball, he’d throw it away recklessly. He’s not doing that anymore, So I think the potential’s there actually for him to be – I don’t know, what is his ceiling? Is it top-eight or 10 quarterback in the league?”

“Yeah, sure, his ceiling is top-10 quarterback in the league,” said Parkins.

If Jones hits the open market and teams believe he can be a top-10 quarterback, he’s going to get paid. According to Spotrac, 11 quarterbacks had a cap hit of over $30 million this season.

Jones finished the season with a career-high 3,205 yards passing with 15 touchdowns and just five interceptions. He also set a career high with 708 rushing yards and seven touchdowns on the ground. 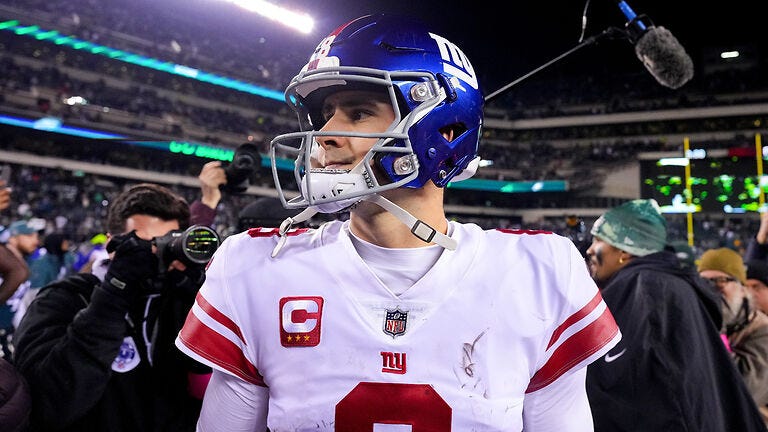