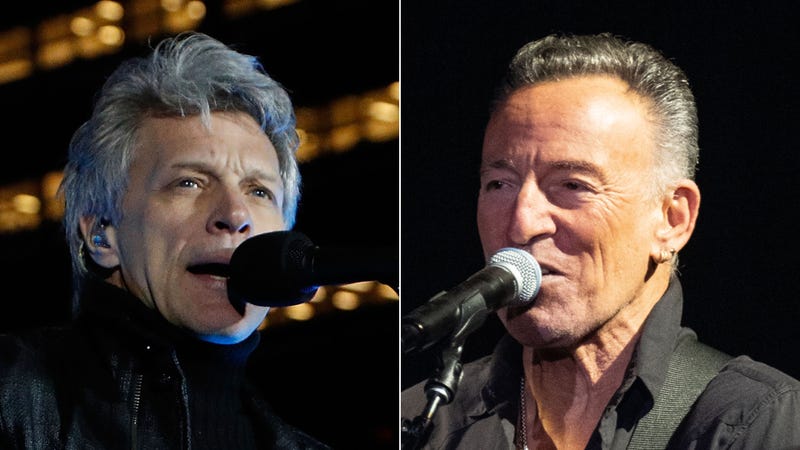 Have you heard this one yet? Bruce Springsteen and Jon Bon Jovi walk into an ice cream shop... That's it. No punchline, just an incredible surprise for the workers at Jersey Freeze in Freehold, New Jersey -- and they've got the picture to prove it!

The Boss and JBJ -- two of the Garden State's top musical royalty -- arrived at the long-serving Jersey Freeze rolling up in Springsteen's sports car for their frozen fix: Two cones; sprinkles for Jon, and a chocolate dip for Bruce. Although the visit was a quick one, the dynamic duo did stick around long enough for shop owners Matt Cangialosi and Katie DiNonno to snap a photo for posterity... and proof!

In business since the early '50s, the ice cream spot, located just about an hour's drive from Metro NYC, has been a family staple for the Springsteen family for years, who has been spotted by the owners quite a few times. Normally they would just let the Boss be, but this time, with an extra layer of rock star added, they simply couldn't resist. “This was me and Matt's first picture," Katie told the Asbury Park Press. "We usually don't bother him when he comes,” she added, "but today it was both of them — there's no way. I'm taking a picture. It was fun."

Can we make one suggestion? Katie, or Matt: Stick a microphone and an acoustic guitar in one of the corners of the shop -- and make some suggestive eyes towards them the next time either of these two show up!

Browse and follow more of Audacy's all-new Rock stations like Bon Jovi Radio, Bruce Springsteen Radio, 80s Guitar, Rock N’ Road, Freedom Rock, The Canyon, Arena Rock, Wake Up and Rock, and The Roots of Rock for those who crave the early days.