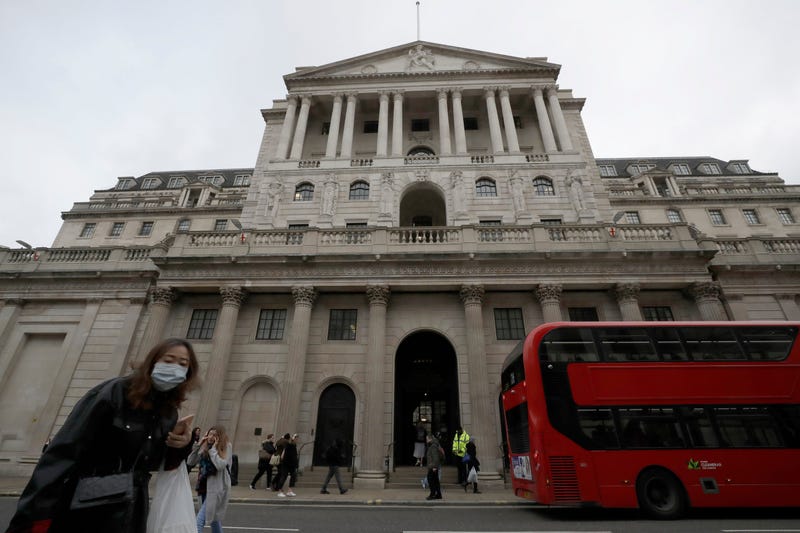 Photo credit FILE - In this file photo dated Wednesday, March 11, 2020, pedestrians wearing face masks walk past the Bank of England in London. The Bank of England kept its main interest rate unchanged at the record low of 0.1% on Thursday Sept. 17, 2020, as it waits to see how the economy recovers from recession and what Britain’s future trade relationship with the European Union will be. (AP Photo/Matt Dunham, FILE)
By The Associated Press

LONDON (AP) — The Bank of England indicated Thursday that it could cut interest rates below zero for the first time in its 326-year history as it tries to shore up a U.K. economic recovery that is facing the dual headwinds of the coronavirus and Brexit.

After unanimously deciding to keep the bank's main interest rate on hold at the record low of 0.1%, the nine-member rate-setting Monetary Policy Committee said it had discussed its “policy toolkit, and the effectiveness of negative policy rates in particular."

In minutes accompanying the decision, the rate-setters said a recent wave of new virus infections and government measures to contain it “have the potential to weigh further on economic activity, albeit probably on a lesser scale than seen earlier in the year.”

Though the committee noted that recent domestic economic indicators have been a “little stronger than expected” at the time of its last meeting in early August, it said it is unclear how informative the recent news is about the future “given the risks.”

There are concerns that Britain, like others in Europe, will reimpose broad restrictions on businesses and public life after the recent flare-up in virus infections across Europe. Already social gatherings are being restricted and certain areas of the U.K. are seeing localized lockdowns.

The British economy suffered one of the deepest recessions in the world this year when many sectors were effectively mothballed as part of efforts to contain the coronavirus pandemic. Though it has recouped some ground over the past few months as lockdown restrictions were eased, the economy was still around 12% smaller at the end of July than it was in February, when the pandemic started in Europe.

Alongside developments related to the virus, Bank of England rate-setters have to keep abreast of developments surrounding the post-Brexit trade discussions between the U.K. and the EU.

With positions seemingly hardening, there are concerns that the talks on a future trade deal could collapse within weeks. If that happens, tariffs and other impediments to trade will be imposed by both sides at the start of 2021, a development that would hurt the U.K. more.

The U.K. left the EU on Jan. 31, but is in a transition period that effectively sees it benefit from the bloc’s tariff-free trade until the end of the year while a future relationship is negotiated.

The committee also said it had been briefed on how negative interest rates, which would in essence seek to encourage banks to lend rather than hoard their cash, could be “implemented effectively.” Further discussions about their potential use will take place at the bank during the fourth quarter, according to the minutes.

Though that doesn't necessarily mean any action is likely this fall, it's a clear signal from the bank that it is ready to enact further stimulus measures to keep the economic recovery going in the face of lockdown measures and Brexit uncertainties.

Financial markets interpreted the announcement as increasing the likelihood of negative rates next year, potentially in the event of the U.K. and the EU failing to agree on a trade deal. The pound fell 0.7% to $1.2884.

Most economists think the bank will boost its bond-buying stimulus program in November — ahead of any push to drive interest rates below zero — to help the economy.