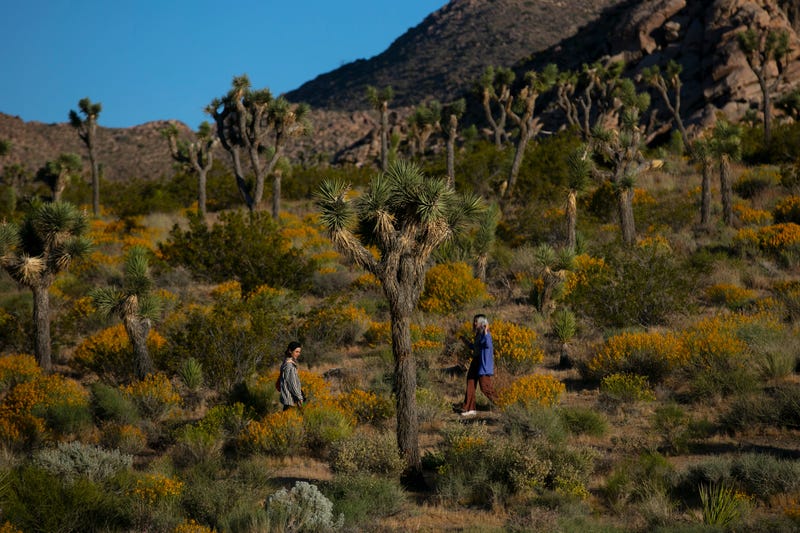 Photo credit FILE - In this May 19, 2020 file photo people visit Joshua Tree National Park in California. The western Joshua tree will be considered for protection under the California Endangered Species Act because of threats from climate change and habitat destruction, The state's Fish and Game Commission on Tuesday, Sept. 22, 2020, voted 4-0 to accept a petition that provides the yucca plants temporary protected status for one year while the agency conducts a study. After the review, commissioners will determine whether the species should be formally protected under the state law. (AP Photo/Jae C. Hong, file)
By The Associated Press

SACRAMENTO, Calif. (AP) — The western Joshua tree will be considered for protection under the California Endangered Species Act because of threats from climate change and habitat destruction, the state Fish and Game Commission decided Tuesday.

The panel voted 4-0 to accept a petition that provides the yucca plants protected status for a year while the agency conducts a study. After the review, commissioners will determine whether the species should be formally protected under the state law.

The petition by the Center for Biological Diversity came last year amid rising concern about the future of the crazy-limbed trees with spiky leaves that have come to symbolize the Mojave Desert and draw throngs to Joshua Tree National Park.

The petition asked that western Joshua trees be given “threatened” status under the act.

The request stated that the trees meet the definition of a plant that “is likely to become an endangered species in the foreseeable future in the absence of the special protection and management efforts.”

Researchers have found that Joshua trees are dying off due to hotter and drier conditions, and fewer young trees are surviving, according to the center, a nonprofit conservation organization based in Tucson, Arizona.

“This is a huge victory for these beautiful trees and their fragile desert ecosystem,” Brendan Cummings, conservation director of the Center for Biological Diversity, said after Tuesday's vote. “If Joshua trees are to survive the inhospitable climate we’re giving them, the first and most important thing we can do is protect their habitat. This decision will do that across most of their range.”

The trees are migrating to higher elevations where there are cooler and more moist conditions, but they face destruction by fire due to invasive, non-native grasses in those locations.

Joshua trees also face challenges due to urban sprawl in the desert as well as degradation of habitat for energy projects, power lines, pipelines and off-road vehicle use.

“With increasing development as well as climate change impacts like the wildfires currently burning in their desert habitat, these CESA protections are what stands between the Joshua tree and extinction," said Pamela Fick, program director for Defenders of Wildlife.

However, the Fish and Game commission voted for an emergency exemption that allows the removal of Joshua trees at the sites of 15 solar energy projects planned in Kern and San Bernardino counties. Industry supporters said the projects are needed to help combat climate change.

The developers will pay money into a mitigation fund — about $10,000 per acre — which will be used to preserve other Joshua tree habitat.

The western Joshua tree’s habitat includes Joshua Tree National Park and stretches to the west along the north slopes of the San Bernardino and San Gabriel mountain ranges into the Antelope Valley, northward along the eastern flank of the southern Sierra Nevada and eastward toward the edge of Death Valley National Park and into Nevada.

The eastern Joshua tree — a distinctly different plant — lives in the Mojave National Preserve and eastward into Nevada, Arizona and Utah.