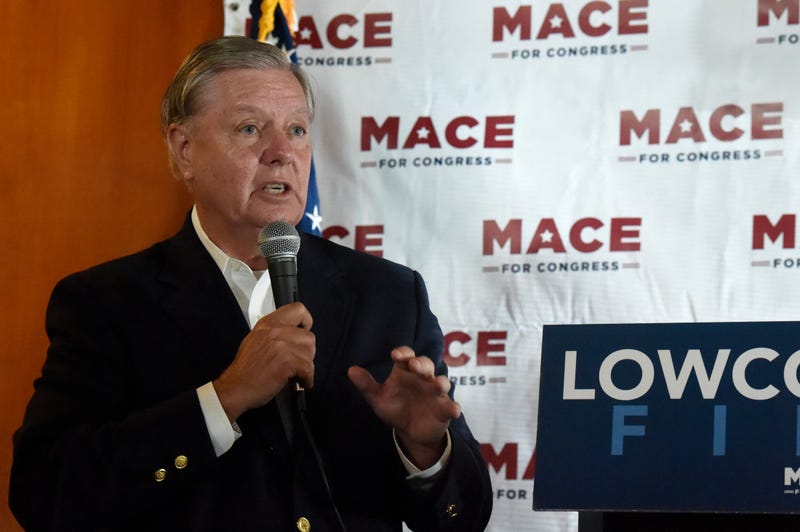 Graham and Harrison, an associate Democratic National Committee chairman, debate Saturday night at 8 p.m. in Columbia. Attendees of the event at Allen University, a historically Black institution, will be socially distanced and required to fill out questionnaires declaring no exposure to or symptoms of coronavirus. Both candidates say they tested negative Friday.

Graham, 65, and Harrison, 44, are slated to meet twice more in October, although Washington politics is already complicating that schedule, with the next meeting moved up several days to Oct. 9. As Senate Judiciary Committee chairman, it's Graham's job to shepherd President Donald Trump’s high court nominee, Amy Coney Barrett, through the Senate.

After several senators announced testing positive for COVID-19, Republican leaders on Saturday announced a refrain from legislative work until Oct. 19. But Senate Majority Leader Mitch McConnell has said that delay won't derail Barrett's hearings, set to begin Oct. 12. With two committee members recently contracting the coronavirus, Graham said on Twitter Friday that, “Any Senator who wants to participate virtually will be allowed to do so.”

Trump has promised a quick confirmation, but the timetable could change with the diagnoses of several senators and Trump, himself, who was admitted to Walter Reed National Military Medical Center on Friday and treated with antiviral medications.

At the helm of a process that will include days of televised hearings, Graham will be in the national spotlight in what is sure to be a contentious confirmation process, and one Graham sees as potentially beneficial to his campaign.

“We're going to fundamentally change the judiciary over time, to take all these liberal activist judges and replace them with highly qualified people like Judge Barrett who will be fair to you, fair to people on the other side, but are not going to take a liberal agenda they can't get passed at the ballot box and make it law, by wearing a robe," Graham said during a Friday campaign event with members of the Fraternal Order of Police.

Harrison, saying he will “relish the opportunity” to have the state to himself while Graham works in Washington, portrays his opponent as more interested in advancing his own goals, rather than those of his constituents.

“We just have a senator who doesn’t care, because all he sees is his political relevance, and his political power,” Harrison said in a recent interview with The Associated Press. “He will say and do anything in order to preserve those two things.”

Their first debate also comes as the campaigns boast raising more than $30 million apiece, and two recent surveys show the candidates in a dead heat. On Thursday, the Constitution Party nominee announced he was throwing his support behind Graham, even thought it's too late to remove his own name from ballots.

Lindsey Must Go, a political action committee that supports Harrison, is pumping money into the race, as is the Senate Leadership Fund, which has launched a multimillion-dollar ad blitz hoping to boost Graham.

Trump carried South Carolina by double digits over Democrat Hillary Clinton in 2016, and Republicans control both legislative chambers, all statewide offices and most of the state’s congressional seats. South Carolina is assumed to be safely in his reelection column, and Graham is expressing confidence in his own reelection chances, too.

“Here is what I want to say to all the liberals talking about South Carolina: we are going to kick your ass,” he said Friday in Myrtle Beach.

Meg Kinnard can be reached at https://twitter.com/MegKinnardAP.

AP’s Advance Voting guide brings you the facts about voting early, by mail or absentee from each state: https://interactives.ap.org/advance-voting-2020/