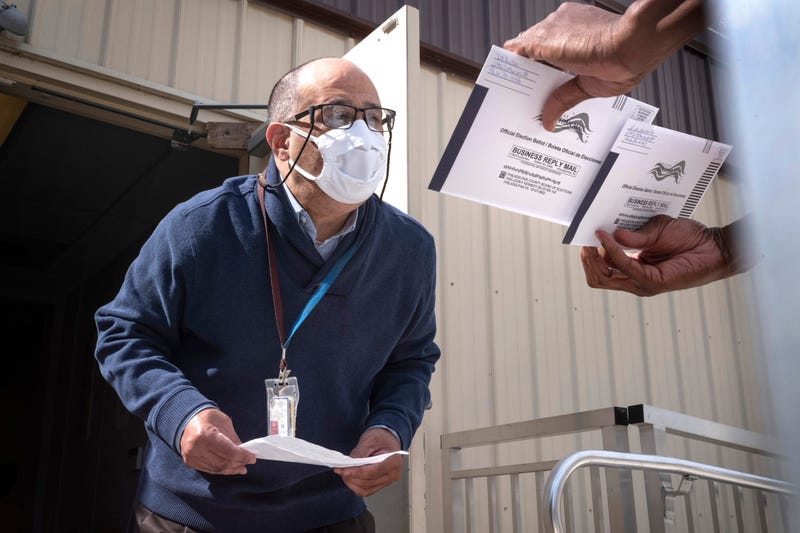 Photo credit FILE - In this Thursday, Oct. 1, 2020 file photo, An employee of the Philadelphia Commissioners Office examines ballots at a satellite election office at Overbrook High School in Philadelphia. Local election clerks can’t start verifying mailed-in ballots in Pennsylvania until Election Day and in Michigan until the day before, which the secretary of state says is not enough time. This means millions of mailed-in ballots in the two key presidential battleground states will not be tallied for days after the election, potentially showing Trump with a tenuous lead there the so-called “red mirage” until all those votes are recorded. (AP Photo/Laurence Kesterson, File)
By The Associated Press

Voters awaiting results in some of the key presidential battleground states on election night should be prepared to keep waiting, thanks to obstacles that will slow the count for what is expected to be a crush of mailed-in ballots amid the coronavirus pandemic.

Many states allow local officials to start processing those ballots weeks before Election Day or even as they arrive. But in some of the most crucial states on the electoral map, rules prevent or give clerks little time to begin sorting ballots and verifying signatures before the election.

That's priming a scenario in which results may come in days — or even weeks — later.

In an election cycle that has seen President Donald Trump baselessly cast doubt on the legitimacy of mail voting, many fear that any delay in results could give the president more room to continue his attacks.

Democrats are requesting mail-in ballots at higher rates than Republicans in many states, giving rise to the notion that Trump could enjoy election night leads — a so-called “red mirage” — only to see that edge slowly vanish as mail-in ballots are tallied over the days that follow.

Potential problems are looming most acutely in Pennsylvania, which is being hotly contested by Trump and Democratic nominee Joe Biden. Republican state lawmakers there have not allowed additional time to process ballots that arrive before Election Day, despite pleas from local election officials.

Pennsylvania is expected to see 3 million or more mail-in ballots — half of this year's total and a ten-fold increase from 2016. Registered Democrats are applying at a rate of nearly 3 to 1 over Republicans.

“The longer it takes for the election results to be known, the greater the risk that they're going to be questioned and second-guessed, and that we're going to be that national news story that we really don't want to be,” said Lisa Schaefer, executive director of the County Commissioners Association of Pennsylvania.

The seemingly mundane administrative task of processing ballots — verifying signatures and other voter information to ensure legitimacy, and separating them from their envelope so they are ready to be tabulated — essentially readies ballots for counting on Election Day. That helps speed up the release of results.