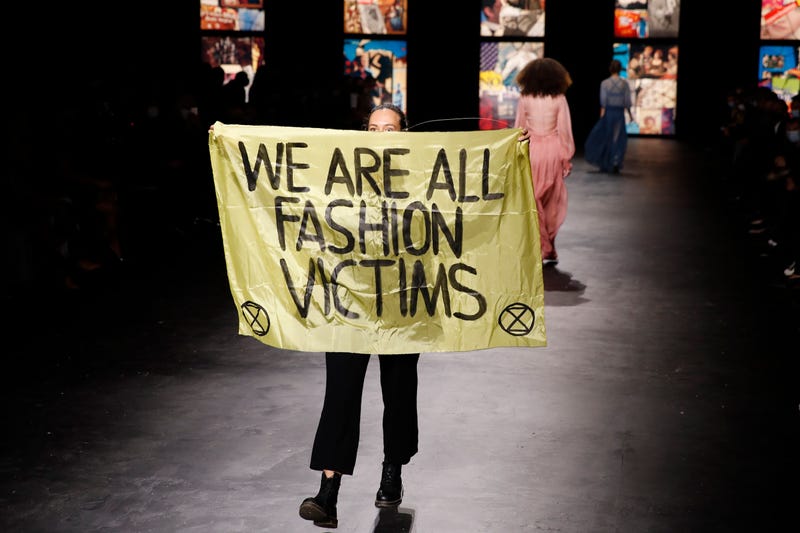 PARIS (AP) — Christian Dior on Tuesday was the first major fashion house to stage a traditional ready-to-wear runway show in Paris since the coronavirus pandemic hit in March.

The show headlined the first full day of a hybrid-style Paris Fashion Week. A giant “DIOR”-emblazoned white annex in the chic Tuileries Gardens stood against the backdrop of the Eiffel Tower, hazy in the drizzle.

Guests were unusually relaxed, with some fashion editors commenting that it was because they had not just flown in, exhausted, from a week of covering Milan. Italy had restricted travelers coming from Paris due to the virus. At Dior, many of the Asian and American editors were missing, making this season a largely European affair. .

Paris, like Milan, is trying to kick off an unusual fashion season for spring-summer 2021. For nine days, the calendar flits between some 16 in-person, ready-to-wear runway collections, with masked guests, celebrities and editors in seated rows; around 20 in-person presentations; and several dozen completely digital shows streamed online with promotional videos.

It was serene and airy at Christian Dior. Masked guests -- including a smaller-than-average sprinkling of VIPs, such as model Natalia Vodianova -- were seated in church-like socially-distanced pews. On the walls, '70s-era magazine clippings helped provide flashes of bright color like stained-glass windows. It was part of an art installation by Lucia Marcucci that aimed to transform the space into a Gothic cathedral.

A dozen singers, each behind a lectern surrounding the runway, broke into rousing a cappella singing, led by a conductor. The church was a clever theme because the congregation-style pews, sprawling by nature, allowed for social distancing without it seeming awkward in the context of a fashion show.

There was little religious in the fluid spring-summer styles. Designer Maria Grazia Chiuri took as her starting point a reinterpretation of the house’s iconic Bar Jacket -- the staple of the New Look -- as designed for Japan in 1957. But Chiuri’s version was loose and patterned and featured ethnic motifs, re-creating the boho mood of the '70s.

At moments, the exuberance went too far, such as a multicolored striped poncho that clashed with the delicate floral print on the bronze silk skirt. But some long embroidered cape coats that hung down regally, with silken patterned insides, more than made up for it.

KOCHE GOES TO THE PARK

The setting for Koché's fashion show could not have been more safe during a pandemic -- next to a lake outside in one of Paris’ biggest parks. The fashion-forward brand thinks outside the box for its clothes, and a rebellious spirit infused the presentation of its collection on Tuesday evening.

Pipe players descended ceremoniously down a hill, providing a sound the house described as the “resonance of hope.” Dozens of quacking ducks were suddenly scared away by a house-run drone that buzzed around the water.

Koché, a brand founded in 2015 by designer Christelle Kocher, celebrates diversity and difference. This season, members of the public who identify as transgender, gender-fluid and non-binary were selected to showcase the designs. Kocher said that “all the models are from Paris. They’re not pros, they’re just beautiful.”

The black ribbed wading boots that opened the show certainly looked the part next to the lake setting. While that same look’s oversize laurel green and tangerine urban coat, champagne tube top and feather headdress set the quirky tone.

Some of the nicest designs were the simplest. A little white dress worn with knee high black stockings had a lace fringe and a slight slit at the side of the leg that evoked subtle provocation.

On a serious note, Kocher touched upon the existential uncertainly circling the fashion industry. She wrote in the program notes that “a fashion show is...like a newborn, like a ghost, like a beautiful memory that will stay forever...Maybe there will be no more shows for the years to come. So...enjoy this one!”

The brand founded by former Courreges designers Arnaud Vaillant and Sebastien Meyer seemed to have a blast this season. Coperni put on the first runway show of Paris Fashion Week, atop the Montparnasse Tower skyscraper building.

The show itself seemed to be about protection and exposure, themes understandably on many a mind in the virus-beaten fashion industry.

Leggings with angular patterns on the knees that resembled padding mixed with garments featuring shell-like square paneling. A hexagonal shape, like a honeycomb lining a beehive, cut a funky style. A violet knit bodice wrap looked like it was protecting the model from the outside world. Silhouettes were streamlined, sporty and monochrome with a flash of color. Zippers exposed models' skin to the grim autumn weather.

French wunderkind Marine Serre found new fame last season for a series of masked looks in her Paris ready-to-wear show in February that were branded prophetic. This season, Serre, one of the best of a new generation of French designers, kept up her creativity and used the new, limited digital platform to its fullest by showcasing her spring-summer 2021 designs via an atmospheric video called “Amor Fati,” or “Love of Fate.”

The clip, which fuses the line between fashion and art, features a naked model on a futuristic surgeon’s table. Models in utilitarian black combat gear, with chains and visors, push a tray of surgeon’s tools through a sanitized white space to unnerving Hitchcockian music. It seemed more like high-advertising than a platform to showcase new designs -- but it was slickly executed