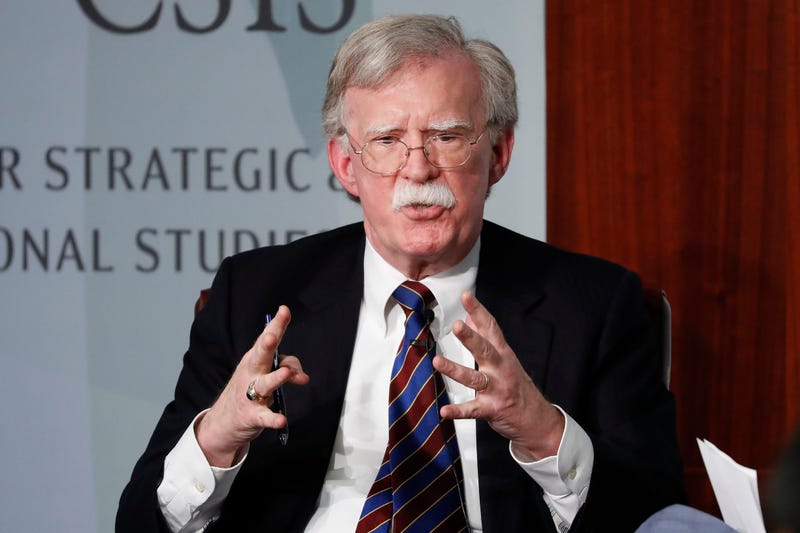 Photo credit FILE - In this Sept. 30, 2019 file photo, former National security adviser John Bolton gestures while speaking at the Center for Strategic and International Studies (CSIS) in Washington. A judge ruled on Thursday that the Trump administration can move forward with its lawsuit against former national security adviser John Bolton over that his tell-all book, which officials say contains classified information. (AP Photo/Pablo Martinez Monsivais)
By The Associated Press

WASHINGTON (AP) — The Trump administration can move forward with its lawsuit against former national security adviser John Bolton over his tell-all book, a judge ruled Thursday in denying a request to dismiss the complaint.

The Justice Department alleges that Bolton's book, “The Room Where It Happened” contains classified information, and the government sued in June to try to prevent the release. Though the book was published, a suit accusing Bolton of breaking contracts with the government by disclosing classified information and by failing to complete a required prepublication review can proceed, U.S District Judge Royce Lamberth said in a 27-page opinion.

The Justice Department, the judge wrote, “plausibly pleads that Bolton breached those obligations.”

Charles Cooper, Bolton's lawyer, said in an email that the ruling, “which we are still studying, means that the case will now move forward to the phase in which the parties will develop and present their evidence.”

The book, which details Bolton’s 17 months as Trump’s national security adviser, contains descriptions of conversations with foreign leaders that could be seen as politically damaging to the president. Those include accounts that Trump tied providing military aid to Ukraine to that country’s willingness to conduct investigations into Democratic rival Joe Biden and Biden's son Hunter, and that Trump asked China’s President Xi Jinping to help his reelection prospects.

Lamberth in June denied the government's request for an injunction to block the book from being published, given that thousands of copies had already been distributed. But in the same order, he also scolded Bolton for moving ahead with the book’s publication without waiting for formal, written authorization that the book had been cleared.

His order clears the way for the Justice Department's suit to move forward, including the government's efforts to seize proceeds from the book. The judge said the government has reasonably shown that Bolton disclosed classified information without first confirming that it was unclassified.

“Even if Bolton operated out of an abundance of caution in submitting his manuscript for review, the very existence of his caution leads to a fair inference that Bolton was less than certain as to the status of the manuscript,” Lamberth wrote. “And the allegation that classified material was actually present in the manuscript makes it more likely that Bolton harbored doubts as to whether everything in his manuscript was unclassified.”

Bolton's lawyers have maintained that he worked for months with a White House career official, Ellen Knight, to ensure that the manuscript was carefully screened for classified information, with Knight concluding that review in April by determining that the book was now free of such material. But White House officials later conducted a second review that they said identified classified information still in the book.

The case took a notable turn last week when a lawyer for Knight submitted a statement that said that after Knight had advised National Security Council lawyers that she intended to clear the book for publication, she was told to take no action and to tell Bolton that the process was “ongoing.”

Weeks later, she learned that a White House official who she says had no previous classification experience had been instructed to conduct a second review of the manuscript. That official, Michael Ellis, flagged hundreds of passages that he believed were still classified. Knight disagreed with that conclusion and considered the re-review to be “fundamentally flawed,” according to the filing.