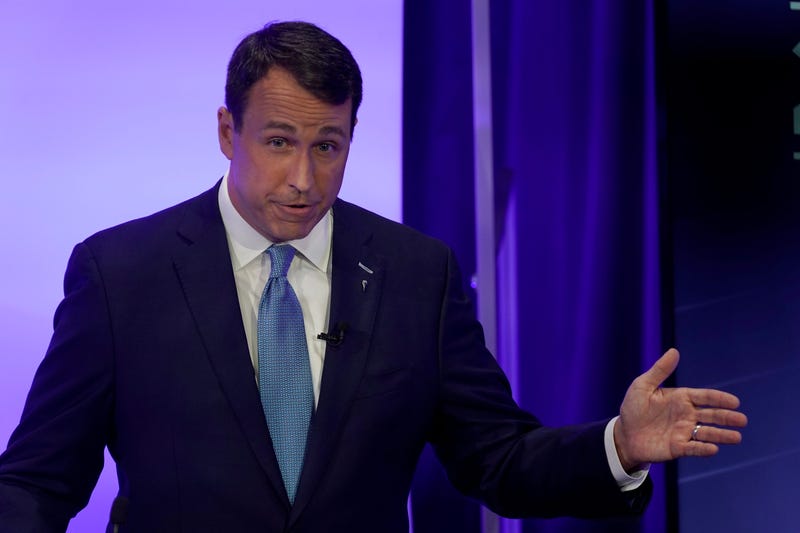 Photo credit FILE - Democratic challenger Cal Cunningham speaks during a televised debate with U.S. Sen. Thom Tillis, R-N.C., Thursday, Oct. 1, 2020, in Raleigh, N.C. Cunningham has admitted to sending sexual text messages to a California strategist who is not his wife. Cunningham apologized but said he would not drop out of the race in a statement to multiple news outlets late Friday. (AP Photo/Gerry Broome, Pool, file)
By The Associated Press

RALEIGH, N.C. (AP) — North Carolina's intensely competitive and expensive U.S. Senate race has been upended by personal and health disruptions that sent sharp tremors and uncertainty through the campaigns and an electorate already casting ballots.

Democratic nominee Cal Cunningham acknowledged and apologized for exchanging sexually suggestive text messages with a woman who’s not his wife, but he said he won’t drop out of the race. And just a few hours earlier Friday evening, his opponent, Republican Sen. Thom Tillis, announced he has tested positive for COVID-19. The first-term senator said he has “mild symptoms,” and the positive test forced Tillis to cancel in-person events, and several members of his campaign staff to head into quarantine, less than five weeks until Election Day.

“It’s chaos — it’s really what I see it is,” David McLennan, a political science professor at Meredith College in Raleigh, said in a Saturday interview.

In the text message exchanges, Cunningham tells the woman he wants to kiss her and she says she wants to spend the night with him. The messages were first reported by the website NationalFile.com.

“I have hurt my family, disappointed my friends, and am deeply sorry. The first step in repairing those relationships is taking complete responsibility, which I do,” Cunningham said in his statement late Friday.

Cunningham, who is married with two teenage children, added he's staying in the Senate race: “I will continue to work to earn the opportunity to fight for the people of our state.”

The race is the nation's most expensive Senate campaign and considered key to determining the power balance in the chamber. Democrats need to gain four seats in November to take control. The developments come as voting already has gone on for four weeks in North Carolina, as 341,000 completed mail-in absentee ballots already have been accepted and will be counted. Early in-person voting begins Oct. 15.

McLennan and Gary Pearce, a longtime state Democratic consultant, said it's unclear how much of an effect the text messages will have on the election.

“Most Democrats are really scared by it, but then you wonder has everything changed in the age of (President Donald) Trump,” Pearce said, adding the electorate’s increased polarization since 2016 could lead many Democrats to stick with Cunningham simply because the party's victory is paramount.

Screengrabs of the messages show Cunningham told public relations strategist Arlene Guzman Todd, “Would make my day to roll over and kiss you about now,” to which she replies, “You’re so sweet. I would enjoy that.”

Another shows Guzman Todd tell Cunningham, “the only thing I want on my to do list is you,” to which Cunningham replies, “Sounds so hot and so fun!”

A spokeswoman for Cunningham’s campaign, Rachel Petri, confirmed on Saturday the authenticity of the text messages. It’s unclear when the messages were sent, but at one point Cunningham says he’s “Nervous about the next 100 days,” which could be a reference to the Senate election. One hundred days before the election would be July 26.

An email trying to reach Guzman Todd at the California-based communications firm that lists her as an employee, as well as voice messages left with what public records indicate are her phone numbers, weren’t returned Saturday. Public records show she had a Raleigh residence briefly until 2015. Guzman Todd is married to someone who has served in the U.S. Army, according to the NationalFile.com report.

Cunningham, 47, is an attorney and Iraq War veteran who still serves as an officer in the U.S. Army Reserve. He served one term in the state Senate in the early 2000s and lost a Democratic primary runoff for U.S. Senate in 2010.

As for Tillis, a spokesman for the Republican said Tillis has “mild symptoms” and will be staying at home for 10 days. Cunningham tweeted that he wished Tillis a “quick recovery” and said he would get tested himself after the two men shared a debate stage Thursday night. No other debates are scheduled.

The Tillis campaign, citing its own health concerns, deferred on Saturday questions about the text messages to Cunningham. National Republican Senatorial Committee spokesperson Jesse Hunt said Cunningham must disclose more so voters can decide his fitness for office: “These are very troubling allegations and Cal needs to be fully transparent with the voters of North Carolina."

National Democrats who helped recruit Cunningham for the race stood with him. “We are confident that he will bring the same courage and determination to the Senate as he has while serving our country in uniform,” Lauren Passalacqua with the Democratic Senatorial Campaign Committee said.

Tillis, 60, was diagnosed with the virus days after attending the Supreme Court nomination ceremony in the White House Rose Garden for Amy Coney Barrett on Sept. 26. The judiciary committee member didn't say in his statement where he believes he caught the virus but did say he had tested negative for the virus on the same day as the White House event. Tillis was wearing a mask at the ceremony and has been among the most consistent Republicans to preach the use of face coverings. In late August, Tillis apologized for listening maskless in person to Trump's Republican nomination acceptance speech outdoors at the White House. McLennan said the positive test could place more questions upon Tillis.

The race is second only to the presidential campaign in terms of overall outside spending, according to the Center for Responsive Politics. More than $97 million already has been spent by independent expenditure groups in the general election, center data says.

Cunningham, who outraised Tillis during the first half of the year, announced Thursday that his campaign would report collecting $28.3 million in the third quarter — a record haul for any North Carolina candidate. Tillis' campaign hasn't announced his third quarter fundraising totals.