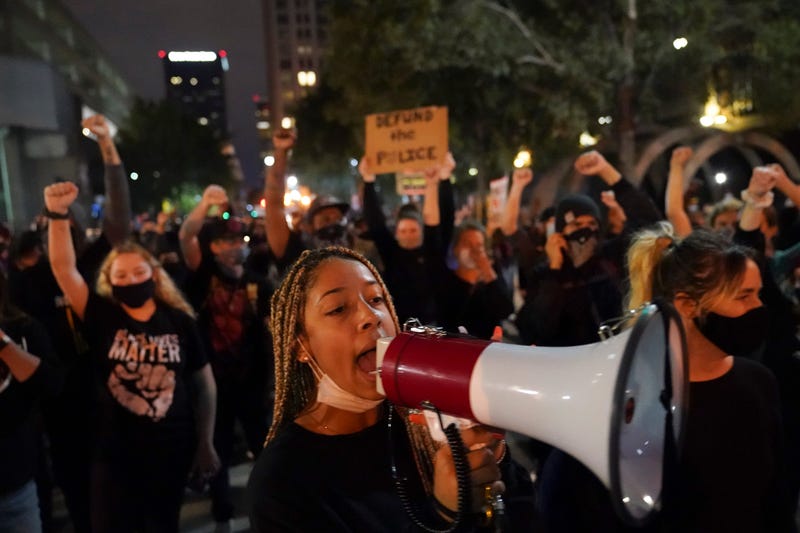 LOUISVILLE, Ky. (AP) — In the wake of the decision not to prosecute Kentucky police officers for killing Breonna Taylor, authorities and activists alike wrestled Thursday with the question of what comes next amid continued demands for justice in the Black woman's death.

“The question obviously is: What do we do with this pain?” Louisville Mayor Greg Fischer said during a news conference. “There is no one answer, no easy answer to that question.”

Fischer pleaded for calm a day after peaceful protests in Louisville turned violent, and a gunman shot and wounded two police officers. Activists, who were back out chanting Taylor's name and marching for a second night as police in riot gear blocked roads, vowed to press on after a grand jury Wednesday didn't bring homicide charges against the officers who burst into her apartment during a drug investigation in March.

Taylor, an emergency medical worker, was shot multiple times by white officers after Taylor's boyfriend fired at them, authorities said. He said he didn't know who was coming in and opened fire in self-defense. Police entered on a warrant connected to a suspect who did not live there, and no drugs were found inside.

State Attorney General Daniel Cameron said the investigation showed officers acted in self-defense; one was wounded. A single officer was charged with wanton endangerment for firing into neighboring apartments.

The only possibility for criminal charges against the officers for the killing itself seems to rest with the U.S. Justice Department. The FBI is still investigating whether Taylor’s civil rights were violated. But the burden of proof for such cases is very high, with prosecutors having to prove officers knew they were acting illegally and made a willful decision to cause someone’s death.

Returning Thursday to the park in downtown Louisville that has been the hub for protesters, Reginique Jones said she’ll keep pressing for increased police accountability and for a statewide ban on “no knock” warrants — the kind issued in the Taylor case, though Cameron said the investigation showed police did announce themselves before entering.