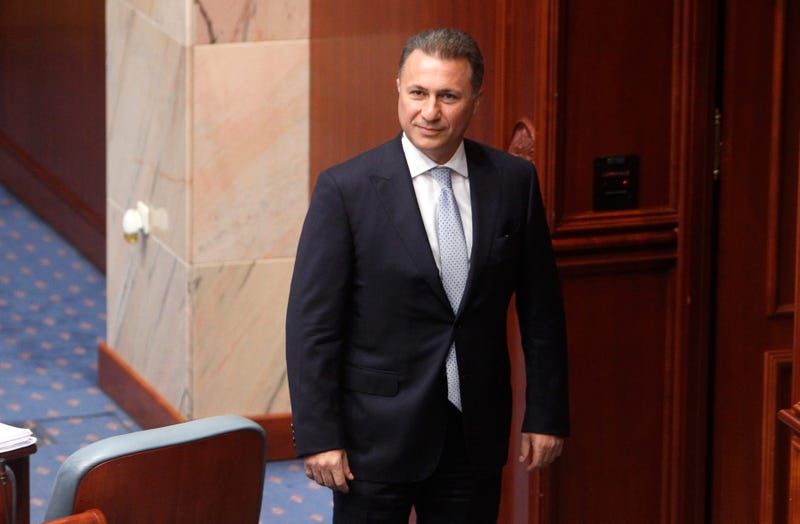 Photo credit FILE - In this Oct. 19, 2018 file photo, Nikola Gruevski, Macedonia's former prime minister, looks on in parliament in the capital, Skopje. A criminal court in North Macedonia has sentenced  former conservative prime minister Nikola Gruevski to 1 1/2 years in prison, and handed suspended sentences to six other party members and supporters for orchestrating violence in 2013, it was reported on Tuesday, Sept. 29, 2020. (AP Photo/Boris Grdanoski, File)
By The Associated Press

Gruevski, who was granted political asylum in Hungary after fleeing there in 2018 to avoid a separate two-year prison sentence for corruption, was sentenced Tuesday in absentia. North Macedonia authorities are still seeking his extradition.

The case stems from a protest in 2013 outside a municipal building in the capital of Skopje. Protesters had tried to forcibly enter the building to prevent municipality board members from blocking a plan by Gruevski, who was prime minister, to remodel the capital's center with dozens of statues and other architectural developments. The municipality at the time was run by the opposition.

The protesters managed to storm the building and much of Gruevski's architectural intervention, which cost an estimated 600 million euros, went ahead. No injuries were reported in the protest.

The trial over the incident began in 2016, and court on Tuesday found Gruevski guilty of having organized and encouraged the protest. The six others who received suspended sentences include Gruevski's former transport minister.

Four other cases are pending against Gruevski, who served as prime minister from 2006-2016, on charges of corruption, election irregularities and abuse of office.

All charges against him stem from a wiretapping scandal that broke in 2015, when it emerged that the phone conversations of more than 20,000 people had been illegally recorded, including those of politicians, judges, police, journalists and foreign diplomats.

The political crisis triggered an early election in 2016 in which Gruevski lost to Social Democrat leader Zoran Zaev.

Gruevski was convicted in 2018 on charges of unlawfully influencing interior ministry officials over the purchase of a luxury armored car, and sentenced to two years in jail. He fled to Hungary before the sentence could be implemented.

Both the defense and the prosecution said they will appeal the sentence.