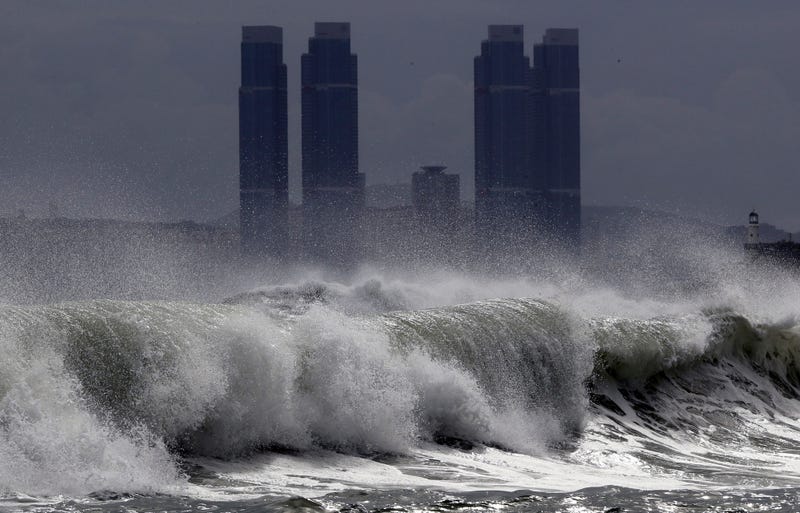 Photo credit High waves crash onto Haeundae Beach in Busan, South Korea, Wednesday, Aug. 26, 2020, as Typhoon Bavi approaches the Korean Peninsula. Hundreds of flights were canceled in South Korea while North Korea's leader expressed concern about a potential loss of lives and crops as the countries braced for a fast-approaching typhoon forecast as one of the strongest to hit their peninsula this year.(Jo Jong-ho/Yonhap via AP)
By The Associated Press

SEOUL, South Korea (AP) — Hundreds of flights were canceled in South Korea while North Korea’s leader expressed concern about a potential loss of lives and crops as the countries braced for a fast-approaching typhoon forecast as one of the strongest to hit their peninsula this year.

Packing a maximum wind speed of 162 kilometers (100 miles) per hour, Typhoon Bavi was already lashing South Korea’s southern resort island of Jeju on Wednesday afternoon, flooding roads, toppling trees, ripping off signboards and knocking down at least one traffic sign as it passed over waters off the island’s western shores. There were no immediate reports of casualties.

More than 460 domestic flights in and out of Jeju were canceled as of Wednesday afternoon, the Korea Airports Corp. said. South Korean authorities were also shutting down public parks and moving hundreds of fishing boats and other vessels, the Ministry of the Interior and Safety said.

In capital Seoul, health workers dismantled some makeshift COVID-19 testing stations over worries that the tents and booths may not withstand strong winds.

North Korea's official Korean Central News Agency said that during a ruling party meeting on Tuesday, the country's leader, Kim Jong Un, called for thorough preparations to minimize casualties and damage from the typhoon. The storm comes weeks after torrential rains caused flooding and massive damage to homes and crops in North Korea, inflicting further pain to an economy ravaged by U.S.-led sanctions over the North's nuclear weapons and border closures amid the pandemic.

KCNA said earlier that a typhoon warning was issued in most areas of the country, with officials moving fishing boats and applying protective measures on buildings, farms and railroads.

In China, authorities suspended ferry services across the Yellow Sea from the northern port of Dalian to the cities of Weihai and Yantai on the Shandong Peninsula as the typhoon closed in on the region. The government of Dalian, a city of 7 million people, issued a statement calling on the public to stay indoors whenever possible on Wednesday and Thursday.

AP researcher Yu Bing in Beijing contributed to this report.