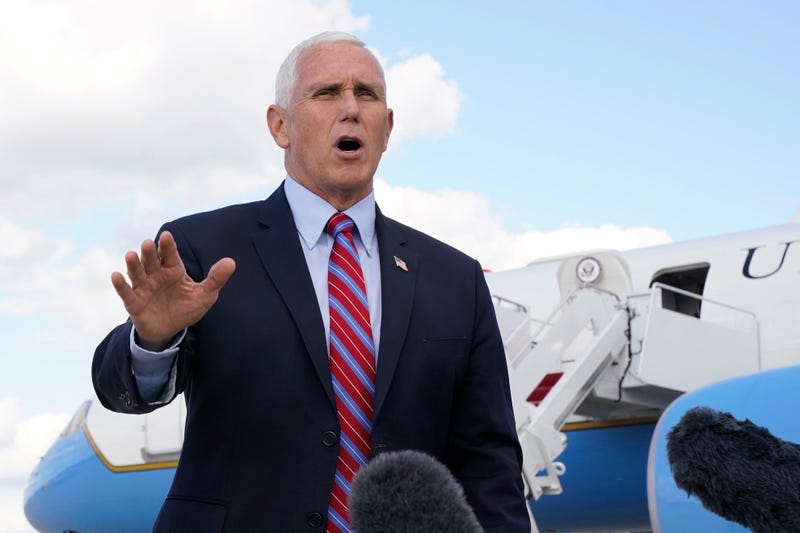 Photo credit Vice President Mike Pence speaks to members of the media at Andrews Air Force Base, Md., Monday, Oct. 5, 2020, as he leaves Washington for Utah ahead of the vice presidential debate schedule for Oct. 7. (AP Photo/Jacquelyn Martin)
By The Associated Press

Trump left Walter Reed Military Medical Center and returned to the White House Monday evening, but it's unclear when he'll be able to travel.

“I spoke to the president a little while back. He sounded great," Pence told reporters at Joint Base Andrews before heading west to Utah for this week's vice presidential debate.

“When the president told me that he was headed back to the White House, he told me to head to Utah. And we’re looking very much forward to the vice presidential debate,” he said. "The stakes in this election have never been higher and the choice has never been clearer.”

The spotlight on Pence will be especially bright Wednesday when he participates in the vice presidential debate with California Sen. Kamala Harris. Pence will almost certainly be pressed to explain shifting accounts of the president's health over the weekend and justify Trump's decision to hold large in-person campaign rallies during a pandemic — events that often flouted public health guidelines by congregating thousands of mostly mask-less supporters.

“Normally, the vice presidential debate is inconsequential. That is not the case in 2020,” said Alex Conant, a Republican strategist who worked on Florida Sen. Marco Rubio’s 2016 presidential bid. “The public has so many questions about how we got here and it’s an opportunity for Pence to answer some of those.”

Pence has often been called upon to smooth over fallout from Trump's messy decision making and divisive policies. Since the 2016 campaign, he has served as a bridge of sorts between a brash, thrice-married former reality television star who long bragged about womanizing and the more traditional branch of the Republican Party, particularly conservative evangelicals.

The smooth diction and humble demeanor Pence brings to the role was honed in the 1990s as a conservative talk-radio host in Indiana, when he referred to himself as “Rush Limbaugh on decaf.”