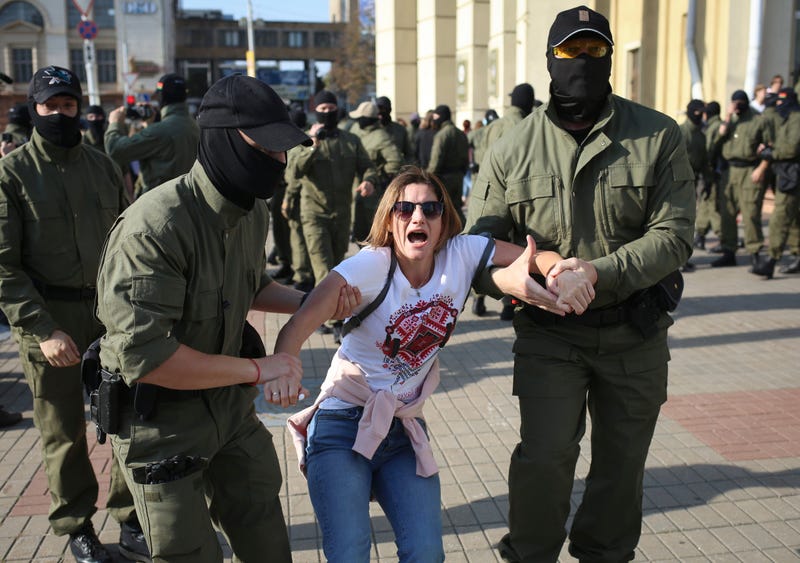 Photo credit Police detain a protester during an opposition rally to protest the official presidential election results in Minsk, Belarus, Saturday, Sept. 26, 2020. Hundreds of thousands of Belarusians have been protesting daily since the Aug. 9 presidential election. (AP Photo/TUT.by)
By The Associated Press

KYIV, Ukraine (AP) — Hundreds of women calling for the authoritarian president to step down protested in Belarus’ capital on Saturday, continuing the large demonstrations that have rocked the country since early August.

Police blocked off the center of Minsk and arrested more than 60 demonstrators, according to the Viasna human rights organization. Some of those arrested were chased down by police in building courtyards where they were trying to take refuge, Viasna said.

Protests, by far the largest and most persistent in Belarus since independence from the Soviet Union in 1991, began Aug. 9 after an election that officials said gave President Alexander Lukashenko a sixth term in office.

Opponents and some poll workers say the results, in which Lukashenko was tallied with 80% support, were manipulated.

Despite wide-scale detentions of demonstrators and the arrest of many prominent opposition figures, the protests haven't shown signs of abating. Lukashenko further angered opponents this week by taking the oath of office for a new term in an unexpected ceremony.

Protesters on Saturday carried placards denouncing him as “the secret president.”

Lukashenko is to give a video address to the U.N. General Assembly later Saturday. His statements are likely to fuel protests on Sunday, which have typically been the largest of the week, attracting crowds estimated at as many as 200,000.

Lukashenko, a former collective farm manager, has been in office since 1994. During that time he has repressed opposition and independent news media and kept most of the country's economy under Soviet-style state control.