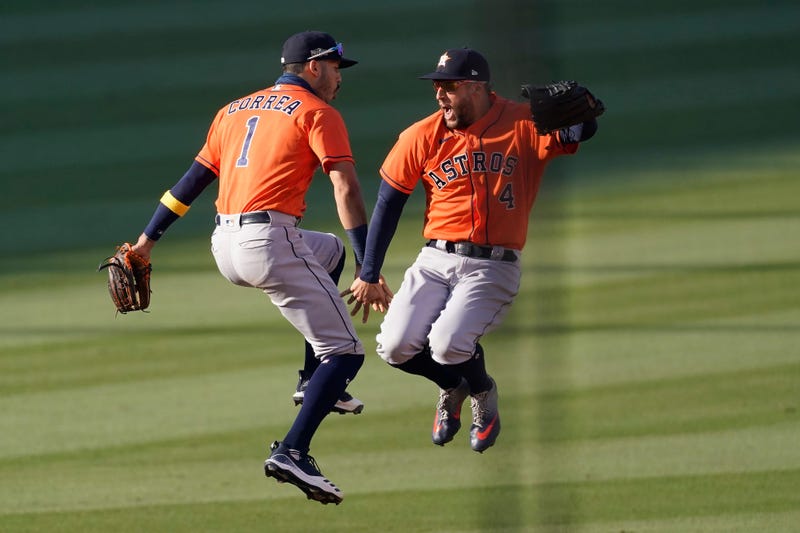 George Springer hit two homers and Houston kept making more noise in the playoffs, beating the Oakland Athletics 5-2 on Tuesday to take a 2-0 lead in their AL Division Series.

Martín Maldonado also went deep for Houston, which needs one win to reach its fourth straight AL Championship Series. Game 3 in the best-of-five series is Wednesday, when Houston is the home team in the neutral site matchup.

Springer put Houston ahead to stay with a two-run, two-out drive in the third on a second straight 90-degree day at Dodger Stadium.

“You don’t know if you're ever going to get back here, so the times you’re here you might as well try and have fun,” Springer said.

Houston went back-to-back in the fifth, extending the lead to 5-2.

Maldonado’s solo shot chased loser Sean Manaea in his first appearance this postseason. Yusmeiro Petit came in, and Springer connected for his second homer of the game. Maldonado yelled and raised his right arm in celebration from his seat in the dugout.

“Just a couple bad pitches,” Manaea said. "I know we are going to figure this thing out and turn it around.”

“I don’t really pay attention to that stuff,” Springer said. “I’d much rather us win.”

The scandal led to season-long suspensions of Houston general manager Jeff Luhnow and manager AJ Hinch, who both were fired. Boston manager Alex Cora and Mets manager Carlos Beltrán also lost their jobs as fallout their roles with the '17 Astros, and Houston still draws ire of other players and fans.

“This is a team that believes in one another and sticks together and really tries to enjoy the day,” Springer said.

Houston turned three double plays, including one to end the game. Second baseman José Altuve got the first two going and had a hand in all three.

“What kept us in the game was our defense,” Baker said. “Jose made some great plays.”

Hot, sunny and dry conditions again created an ideal environment for the long ball. The teams combined for five homers, raising the series total to 11.

“His ball is moving all over the place. His breaking ball was good," A's manager Bob Melvin said. "Our bats were better early. He got more confidence as the game went along. Last three times out he has pitched with a lot of confidence.”

Enoli Paredes retired the side in the eighth. Ryan Pressly worked around Marcus Semien's leadoff single in the ninth, Oakland's only hit past the fourth inning, to finish a six-hitter for his second save of the postseason.

“We have nothing to lose from here,” A's infielder Chad Pinder said.

Oakland got on board with Khris Davis’ second-inning home run, his third of this postseason that put the A's ahead.

After Springer's first homer, the Astros extended their lead to 3-1 on Carlos Correa's RBI groundout in the fourth that scored Michael Brantley, who doubled leading off.

Pinder led off the bottom half with a 453-foot homer to right-center, the longest home run at Dodger Stadium this season.

For the second straight game, Oakland's starting pitching failed to go deep. Manaea gave up four runs and five hits in 4 2/3 innings. Chris Bassitt didn't get out of the fourth in Game 1, allowing three runs and nine hits.