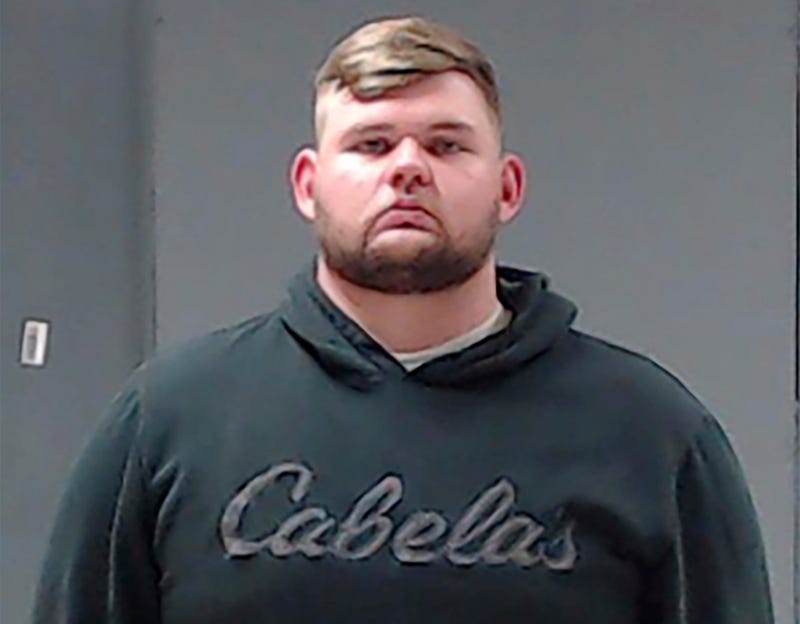 Photo credit This booking photo provided by the Hunt County (Texas) Sheriff's Office shows Wolfe City Police Officer Shaun Lucas on Monday, Oct. 5, 2020. Lucas has been charged with murder in the fatal shooting of a Black man following a reported disturbance at a convenience store in a small East Texas town over the weekend, authorities said. (Hunt County Sheriff's Office via AP)
By The Associated Press

WOLFE CITY, Texas (AP) — A white police officer has been charged with murder in the fatal shooting of a Black man following a reported disturbance at a convenience store in a small East Texas town over the weekend, authorities said.

Lucas, 22, was booked Monday into the Hunt County Jail on Monday night, the Texas Rangers said in a statement released by the Texas Department of Public Safety. Jail records show bail was set at $1 million.

It wasn't immediately known if Lucas had a lawyer who could comment on his behalf.

Lucas had been with the Wolfe City Police Department for a little less than six months when the shooting took place, according to records from the Texas Commission on Law Enforcement. His prior law enforcement experience had been working as a jailer with the Hunt County Sheriff's Office for about five months just before he was hired in Wolfe City.

As of last year, Wolfe City’s police department had five officers and a chief of police, all of whom were white men, according to Texas Commission on Law Enforcement data. The town about 70 miles (113 kilometers) northeast of Dallas has about 1,500 residents. According to the U.S. Census Bureau, 71% of its residents are white, 14% are Black and 13% are Hispanic.

According to the Texas Rangers' statement, Lucas responded to a disturbance call on Saturday night following a report of a possible fight. He encountered Price, 31, who was reportedly involved in the disturbance, and Price “resisted in a non-threatening posture and began walking away,” the Texas Rangers said.

Lucas used a stun gun before shooting Price, who was taken to a hospital and died, the statement said.

Police didn’t release details about the disturbance, but family and friends of Price said Monday that the one-time college football player was intervening in a domestic disturbance when he was shot.

“When police arrived, I’m told, he raised his hands and attempted to explain what was going on,” said civil rights attorney Lee Merritt in a Facebook posting. “Police fired Tasers at him and when his body convulsed from the electrical current, they ‘perceived a threat’ and shot him to death.”

After Lucas' arrest was announced, Merritt posted: “This didn’t happen quickly. It should (have) happened the day he murdered JP. John should still be here."

Price’s relatives and friends said Price, a Wolfe City employee, was a figure well-known about the closely knit community.

Price played football in 2008 for Hardin-Simmons University in Abilene, Texas. Hardin-Simmons football coach Jesse Burleson tweeted that the university “lost one of our own in a terrible situation. Jonathan Price was an awesome young man during his time with Cowboy football.”

Former Major League Baseball third baseman Will Middlebrooks, who grew up with Price, said on Facebook: “I’m sick. I’m heartbroken... and I’m furious.” Middlebrooks started an online fundraiser for Price's family that surpassed its $50,000 goal in less than 24 hours.