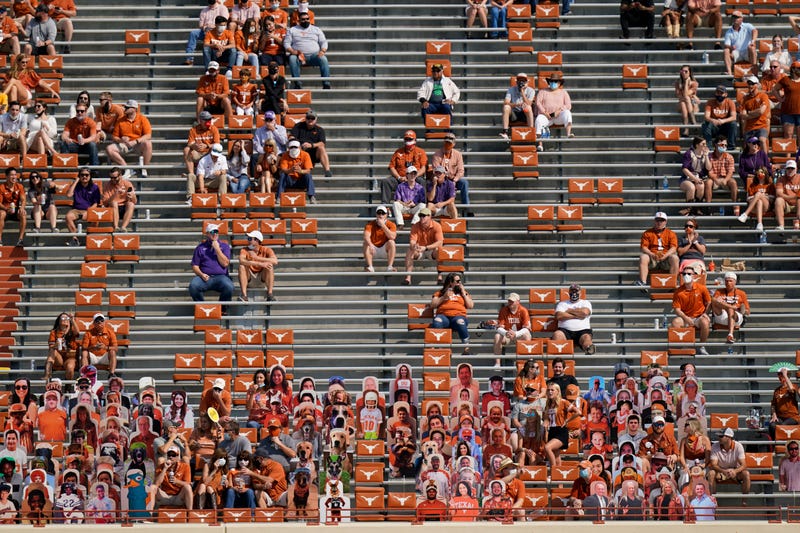 Photo credit Fans wear face masks and use social distancing during the first half of an NCAA college football game between Texas and TCU, Saturday, Oct. 3, 2020, in Austin, Texas. (AP Photo/Eric Gay)
By The Associated Press

The Cincinnati Bengals will be allowed to double their home crowd to 12,000 for the remaining six games at Paul Brown Stadium.

The state of Ohio on Tuesday cleared the team to increase the limit after most fans in last Sunday’s crowd of more than 6,000 demonstrated “safe and healthy” behavior. Social distancing and face coverings will still be required.

The Bengals host the Cleveland Browns on Oct. 25. The first home game at the stadium on Sept. 13 was played without fans.

The Minnesota Vikings will play at least one more home game without fans. No tickets will be sold when they host the Atlanta Falcons on Oct. 18, as was the case for the team’s first two games at U.S. Bank Stadium last month.

The Vikings announced Tuesday they’ll again have a maximum of 250 family members of team personnel on hand for the game to further test game-day protocols in anticipation of fans possibly attending games later in the season.

They’ve been working with state and city officials to arrange for a limited number of fans to be allowed in, but current COVID-19 infection rates in Minnesota and corresponding state guidelines for indoor gatherings will keep the gates closed for now.

The next possibility for hosting fans for the Vikings would be the Detroit game on Nov. 8.

Iowa linebacker Djimon Colbert and defensive lineman Taajhir McCall have decided to opt out of the 2020 football season because of the COVID-19 pandemic.

Colbert started 13 games last season and recorded 61 tackles, an interception and four pass breakups. McCall did not play as a freshman last year.

The Hawkeyes open Oct. 24 at Purdue.

Charlotte Thomas has withdrawn from the KPMG Women’s PGA Championship after her caddie tested positive for the coronavirus.

Thomas dropped out because she was in close contact with the caddie and will begin a 14-day quarantine. The 27-year-old Thomas was among the field set to play beginning Thursday at Aronimink Golf Club just outside Philadelphia in Newtown Square, Pennsylvania.

A rookie in 2019, Thomas tied for 54th in the ShopRite LPGA Classic last weekend and tied for 35th in the Cambia Portland Classic last month. She did not make the cut in the Ana Inspiration, the last major for women.

Isi Gabsa is now in the field at the Women’s PGA Championship. Paula Reto is the first alternate.

Serie A president Paolo Dal Pino has tested positive for the coronavirus.

The league says the test on Dal Pino was taken Monday. It adds that the president is symptomatic and in isolation at his home.

Serie A’s handling of the virus has been under the spotlight after Napoli refused to travel to a game at Juventus on Sunday following positive tests for two of its players. The league judge could inflict Napoli with a 3-0 loss.