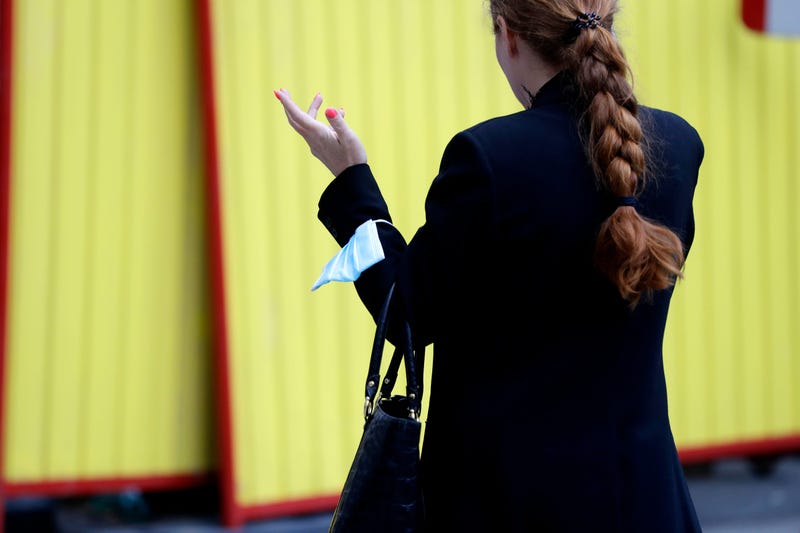 Photo credit A woman wears her face mask on her arm, in Prague, Czech Republic, Tuesday, Oct. 6, 2020. After relaxing almost all restrictive measures in the summer, the Czech government has responded to one of the worst spikes in European countries by declaring a state of emergency. That has been accompanied by strident restrictions ranging from limiting public events to a ban on singing at churches and schools. (AP Photo/Petr David Josek)
By The Associated Press

PRAGUE — Coronavirus infections in the Czech Republic have hit a record high, surpassing 4,000 cases in one day for the first time.

Most infected still have no or mild symptoms but the recent steep day-to-day increase is followed by an increase of people hospitalized and those who have died.

Of the total of 90,022 cases in the Czech Republic, 1,387 needed hospital treatment on Monday, according to government figures, with 326 in serious condition. That was up from 825 hospitalized at the beginning of last week with 187 in intensive care. Of the 794 people who have died of COVID-19 in the country, 169 were since Sept 28.

The government has declared a state of emergency and is strictly limiting public gatherings indoors and outdoors, limiting opening hours and number of people in bars and restaurants and closing some schools.

HERE’S WHAT YOU NEED TO KNOW ABOUT THE VIRUS OUTBREAK:

— Catastrophic collapse of medical supply chain was one of the most consequential failures of US outbreak, and people died

LONDON — Pharma giant Roche says problems at a U.K. warehouse are delaying shipments of testing products to clinics and hospitals, triggering concerns the issue may curb COVID-19 testing at a time when infection rates are rising around Britain.

Roche informed doctors about the problem at distribution center in Sussex in a letter that advised customers to “prioritize essential services only.” Britain’s National Health Service needs the materials to conduct blood tests and screening for diseases like diabetes and cancer.

Roche issued a statement saying, “we are prioritizing the dispatch of Covid-19 PCR and antibody tests and doing everything we can to ensure there is no impact on the supply of these to the NHS.”

NEW DELHI — India has registered 72,049 new coronavirus cases in the past 24 hours, driving the country’s total to 6.75 million.

The Health Ministry on Wednesday also reported 986 deaths in the past 24 hours, taking the toll to 104,555.

Almost 50% of the deaths due to COVID-19 in India are concentrated in 25 districts in eight states and nearly 10 states account for 77% of the total active cases in the country, according to the ministry.

India’s recovery rate stands at more than 84%. The government has cited that figure as a reason for further opening the economy by allowing movie theatres to partially reopen from Oct. 15 with 50% capacity.

The health ministry on Tuesday also issued guidelines for large gatherings during upcoming religious festivals and barred people from touching idols and holy books at such events to prevent the spread of the virus.

Asked about Trump’s messages that people should not be afraid of COVID-19, Treasurer Josh Frydenberg told the National Press Club: “What I will say is that we take COVID-19 very seriously. It’s a deadly virus.”

Frydenberg was then asked whether Trump’s social media posts that liken COVID-19 to influenza were irresponsible.

“Well, you won’t see (Prime Minister) Scott Morrison putting out those sort of messages. What Scott Morrison, what (Health Minister) Greg Hunt, what myself and others have always said is that this virus is deadly an