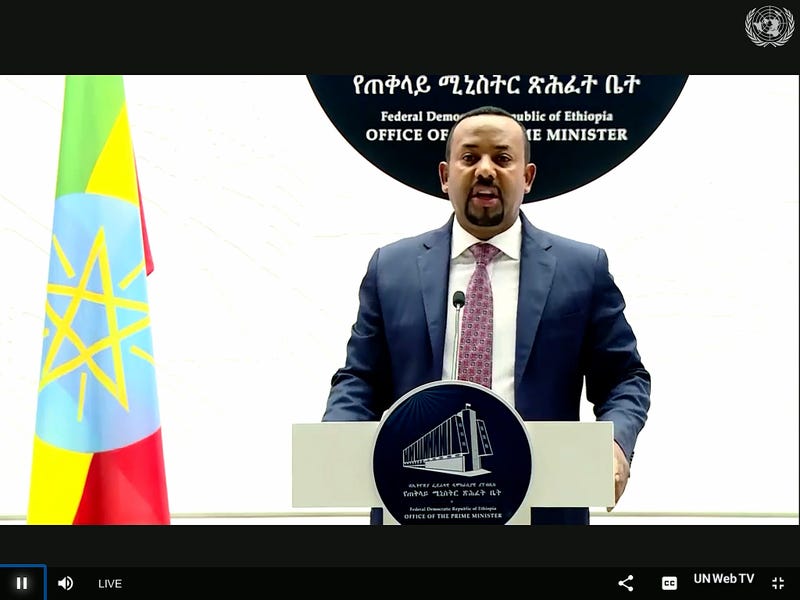 Photo credit In this image made from UNTV video, Abiy Ahmed, Prime Minister of Ethiopia, speaks in a pre-recorded message which was played during the 75th session of the United Nations General Assembly, Wednesday, Sept. 23, 2020, at U.N. Headquarters. (UNTV Via AP )
By The Associated Press

UNITED NATIONS (AP) — The Latest from the U.N. General Assembly (all times EDT):

Ethiopia’s Nobel Peace Prize-winning prime minister, Abiy Ahmed, has told the annual U.N. gathering of world leaders that the country has “no intention to harm” Egypt and Sudan, which are downstream from a hydroelectric dam Ethiopia is building on the Nile River and has led to talk of potential military action.

Egyptian President Abdel-Fattah el-Sissi also used his U.N. speech this week to describe the dam, Africa’s largest, as an existential threat. Even U.S. President Donald Trump has intervened in the dispute between two of Africa’s most populous and powerful nations, directing the State Department to suspend some aid to Ethiopia over “lack of progress” in talks among the countries.

Negotiations continue on a deal that must address how to resolve future disputes.

Abiy also warned of a cascade of crises, including a locust outbreak, climate change and the COVID-19 pandemic, saying they threaten to “wipe out the livelihoods of millions of our people.”

He reaffirmed his commitment to the reforms that in part led to his Nobel Peace Prize, despite the “resistance that comes with trying to shift the status quo in favor of social justice.” He faces a major challenge from deadly unrest as long-marginalized groups seek more say and once-suppressed grievances flare up.

Khan said Friday that Islamophobia prevails in India today and threatens the close to 200 million Muslims who live there.

In a prerecorded speech to the U.N. General Assembly, Khan said, “They believe that India is exclusive to Hindus and others are not equal citizens.”

India’s U.N. representative, T.S. Tirumurti, said on Twitter that Khan’s speech was “a new diplomatic low” full of “vicious falsehood.” He said India would offer a further rebuttal later Friday, when it will have an opportunity to reply under U.N. rules.

Khan has frequently criticized the decision by the government of Prime Minister Narendra Modi in August 2019 to strip Jammu and Kashmir’s statehood, scrap its separate constitution and remove inherited protections on land and jobs. India’s security clampdown has sparked protests, and U.N.-appointed independent experts have called on the Indian government to take urgent action.

India accuses Pakistan of arming and training insurgents fighting for Kashmir’s independence from India. Pakistan denies the charge and says it offers only diplomatic and moral support to the rebels.

The Kashmir region is split between India and Pakistan, which have fought two wars over the territory.

Khan, as he did in his speech before the world body last year, also condemned the targeting of Muslims in many countries and provocations and incitement “in the name of free speech.”

Despite Khan’s outcry at the treatment of Muslims worldwide, Pakistan has not criticized China’s assault on its Muslim minority Uighur population. Pakistan’s silence, like that of other influential Muslim nations, is linked to its economic ties to China. Pakistan is heavily indebted to China and the two countries have a long history of cooperation both economically and militarily.

European Union leader Charles Michel used the virtual pulpit of the U.N. General Assembly on Friday to lash out at Britain, which is threatening to renege on parts of the withdrawal treaty it signed with the EU. He warned that the 27-nation bloc won’t back down in the final weeks of acrimonious talks on a free-trade deal.

“Respect for treaties, a basic principle of international law, comes to be considered optional even by those who, until recently, were its historical guarantors,” Michel said, in an unmistakable references to the United Kingdom.

The United Kingdom is a founding nation of the United Nations and a member of the Security Council, and the country has been a global diplomatic juggernaut for centuries.

Michel’s ire was raised when British Prime Minister Boris Johnson said he would contemplate breaking an agreement he signed with the EU.