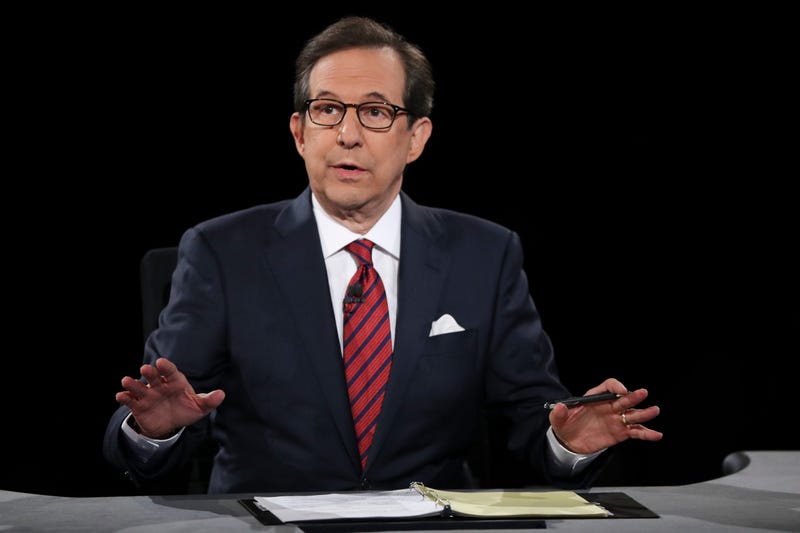 Photo credit FILE - In this Oct. 19, 2016 file photo, moderator Chris Wallace guides the discussion during the presidential debate at UNLV in Las Vegas. All eyes are on Fox's Chris Wallace as he prepares to moderate the first presidential debate. Wallace is the only journalist moderating one of the four debates this fall who has been there before: he was the onstage referee for the third meeting between President Donald Trump and Hillary Clinton. (Joe Raedle/Pool via AP, File)
By The Associated Press

NEW YORK (AP) — Four years ago when he first moderated a general election presidential debate, Chris Wallace was firm and funny in trying to get Donald Trump and Hillary Clinton to stop talking simultaneously.

He'll have more queries Tuesday when the 72-year-old “Fox News Sunday” host moderates the first of three scheduled debates between President Trump and Democrat Joe Biden. He's the only host this fall who has been there before.

Wallace declined an interview request through Fox but his work offers clues about how he will approach the assignment.

It was a coup for Wallace, and his network, when he became the first Fox News journalist assigned to a debate — even more so to get the leadoff position this year. A former White House correspondent with NBC in the 1980s, Wallace left ABC News' crowded bench in 2003 for his own Sunday show at Fox.

He's a straight shooter with a reputation for independence, his stature increasing as opinion personalities became more ascendant at Fox.

“Nobody does his homework better than Chris,” said Tom Bettag, former ABC “Nightline” producer who now teaches journalism at the University of Maryland. “He will come to the debate having worked his tail off to have all the facts and be able to anticipate what each candidate will say.”

Wallace is methodical, even-tempered and never showy — in many ways the polar opposite of his dad Mike, the legendary “60 Minutes” man who relished his reputation as the interviewer no one wanted to see on the doorstep.

The two men had a famously complicated relationship that culminated in an episode where comedian Chris Rock didn't show up for a scheduled interview with Chris Wallace at ABC because he decided to talk to Mike at “60 Minutes” instead.

Furious, Chris called his father to confront him about stealing his story. Mike Wallace backed off, to a point.

With an instinct for the jugular, Trump has picked at the father-son dynamic when unhappy with Chris. Trump has tweeted, more than once, that Chris will “never be his father.”

Mike Wallace, it should be noted, never moderated a presidential debate.

When Chris did, he favored direct questioning designed to get the candidates talking. For instance, after outlining differences in the Clinton and Trump approaches on immigration, he asked, “why are you right and your opponent wrong?”

He inquired about their philosophies on appointing Supreme Court justices, then followed with more pointed queries. He asked Clinton about late-term abortions and pressed Trump on whether he wanted the court to overturn the Roe v. Wade decision that permitted abortion, repeating the latter question two times when Trump didn't answer.

Wallace seemed incredulous four years ago when Trump, asked whether he'd accept the election's results win or lose, said “we will look at it at the time.” Wallace got roughly the same response when he asked it again this summer during a Trump interview on “Fox News Sunday.”

Don't be surprised if it comes up a third time on Tuesday, particularly since Trump brought up the topic again last week.

Last week Wallace announced the topics he will cover, including the Supreme Court, COVID-19, the economy, social justice and the Trump and Biden records.

Wallace's affiliation with Fox News is likely to be on the minds of some Biden supporters, just like Trump would be wary of someone from CNN. Steve Scully of C-SPAN and Kristin Welker of NBC News will moderate the other two presidential debates.

“Wallace is clearly an excellent interviewer who has demonstrated a willingness to confront politicians of both parties, but it is hard to separate his work from his decision to be part of a network that profits off of racial division," said Dan Pfeiffer, a former press aide in the Obama White House and now a host of “Pod Save America.”

Asked for comment, Fox said it was “extraordinarily proud” of Wallace.

During interviews with Trump this summer, Wallace and Jonathan Swan of Axios proved par