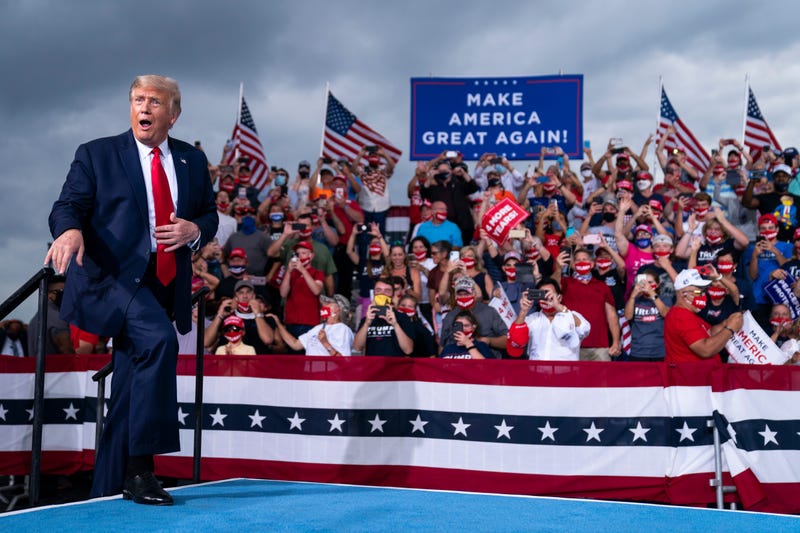 Photo credit President Donald Trump reacts to the crowd as he arrives to speak at a campaign rally at Smith Reynolds Airport, Tuesday, Sept. 8, 2020, in Winston-Salem, N.C. (AP Photo/Evan Vucci)
By The Associated Press

“This protects your beautiful gulf and your beautiful ocean, and it will for a long time to come,” Trump said as he announced the expanded drilling ban during an appearance at the Jupiter Inlet Lighthouse.

The president signed a memorandum instructing the interior secretary to prohibit drilling in the waters off both Florida coasts, and off the coasts of Georgia and South Carolina for a period of 10 years — from July 1, 2022, to June 20, 2032.

The existing moratorium covers the Gulf of Mexico, and Trump said the new one would also cover the Atlantic coast — a significant political concern in coastal states like Florida.

Trump used the event to portray himself as an environmental steward and contrast his record against that of Democrat Joe Biden. But the Trump administration has overturned or weakened numerous regulations meant to protect air and water quality and lands essential for imperiled species.

The trip comes as Trump steps up his travel to battleground states eight week before the election. From Florida, he headed for a campaign rally in North Carolina, another must-win for his reelection, before returning to the White House late Tuesday.

Trump used the North Carolina stop to campaign against the state's restrictive coronavirus guidelines, as he openly flouted the 50-person cap on outdoor events with a rally of thousands of supporters standing shoulder-to-shoulder on an airport tarmac.

"Your state should be open,” Trump said, baselessly claiming that Democratic Gov. Roy Cooper and others were trying to hamstring their economies with restrictions to hurt his reelection. “It’s a shame what’s going on, and I’ll tell you what, on Nov. 4, every one of those states will be open. They’re doing it for political reasons.”

Back in Florida, Trump used the taxpayer-funded event to lambaste his opponent with claims that Biden would "destroy America’s middle class" and give a "free pass to the world’s worst foreign polluters.”

Biden has called for eliminating carbon emissions from power plants by 2035 and modernizing the electric grid. Both moves would curtail fossil fuel demand. His plan also includes significant direct public spending and tax subsidies for other energy sources, which Biden’s campaign says would spur new jobs even as traditional energy jobs wane.

Biden calls out China as the world’s biggest coal polluter and says he’d hinge all future trade deals with Beijing on carbon reductions. He supports an international alliance to help other nations afford low-carbon development and pitches a global moratorium on Arctic offshore drilling.

The announcement could open Trump to charges of an election-year flip-flop given that in January 2018 he acted to vastly expand offshore drilling from the Atlantic to the Arctic oceans and he has supported efforts to boost American energy production to lessen reliance on foreign sources.

“Just months ago, Donald Trump was planning to allow oil and gas drilling off the coast of Florida,” Biden tweeted. “Now, with 56 days until the election, he conveniently says that he changed his mind. Unbelievable. You don’t have to guess where I stand: I oppose new offshore drilling.”

Trump offered himself as the greatest environmental president since Theodore Roosevelt.

“Who would have thought? Trump is the great environmentalist,” the president said. “You hear that? That’s good, and I am. I am. I believe strongly in it."

But Trump has rolled back numerous regulations designed to protect the environment, from power plant emissions to auto fuel standards to clean water. He withdrew the U.S. from the Paris Climate Accord, a global agreement to address the emission of heat-trapping greenhouse gases.

The environment has also been the primary target of Trump's push to eliminate regulations, eliminating or weakening dozens of rules that protect the air and water, along with lands essential for imperiled species while reversing Obama-era initiatives to fight climate change.

South Carolina Gov. Henry McMaster, a longtime Trump ally who has opposed the administration’s drilling exploration expansion plans, applauded Tuesday's announcement as “good news” but warned “we must remain vigilant in the conservation and preservation of our coastline.”