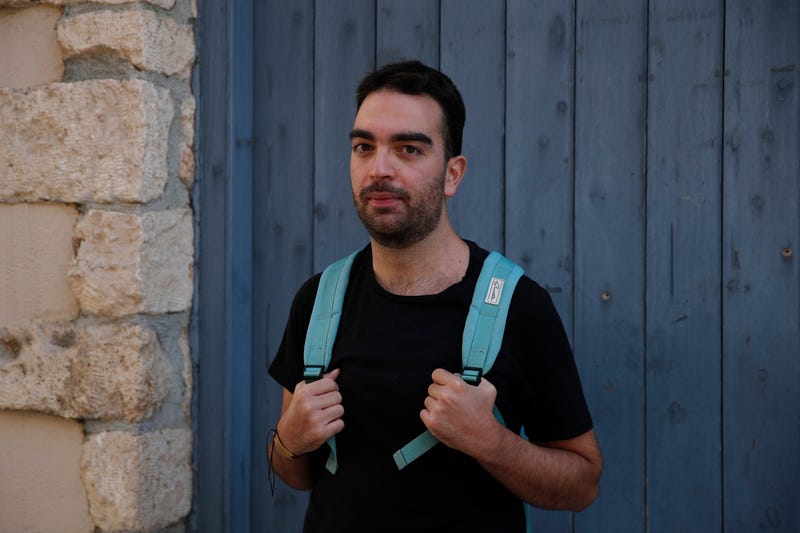 Photo credit Actor and theater director Aris Laskos poses outside the Theater of Neos Kosmos in Athens, Thursday, Oct. 1, 2020. Laskos based in Athens, hasn't worked since early February and received a one-off support check for 800 euros ($940) shortly after the country's economy was placed in lockdown in the spring due to the pandemic. (AP Photo/Thanassis Stavrakis)
By The Associated Press

FRANKFURT, Germany (AP) — Unemployment rose for a fifth straight month in Europe in August and is expected to grow further amid concern that extensive government support programs won't be able keep many businesses hit by coronavirus restrictions afloat forever.

The jobless rate increased to 8.1% in the 19 countries that use the euro currency, from 8.0% in July, official statistics showed Thursday. Some 13.2 million people were unemployed and the number of those out of work rose by 251,000.

While Europe's unemployment rate is still modest compared with the spike seen in many other countries, economists predict it could hit double digits in coming months as wage support programs expire. A resurgence in infections in many countries has meanwhile led to new restrictions on businesses and public life may that may have to be broadened and could lead to more layoffs.

European governments have approved trillions of euros (dollars) to help businesses, setting up or bolstering programs to keep workers on payrolls. In the region's largest economy, Germany, some 3.7 million people are still on furlough support programs. With no clear end to the pandemic in sight, the government has extended that through the end of 2021. The program pays over 70% of the salaries for workers put on short hours or no hours. The European Central Bank is injecting 1.35 trillion euro ($1.57 trillion) into the economy.

But while those measures have slowed the rise in unemployment, jobs continue to vanish. Companies in the hardest hit industries such as airlines, tourism and restaurants expect a long period of weak business and are laying off workers.

In Lisbon’s city center, where the pandemic has seen tourist numbers drop, laid off restaurant worker Mary Lopes, 21, is trying to make sense of it. The restaurant she worked in close down completely in March. When it reopened, only a few of the staff were kept on, under tougher conditions and the others were left out of work.

“I’ve been working since I was 16,” said Lopes. “I was a good waitress - I know I was a very good waitress. So I don’t understand this situation we are going through.”

Her older colleagues Anabela Santos, 48, and Carlos Silva, 69, are at least getting unemployment benefits, but that barely covers expenses.

Santos paid five months of overdue bills when she got her unemployment benefit, and sent resumes everywhere. “I haven’t managed to find another job,” she said.

“It’s an overdose of stress because we haven’t a penny in our pockets,” says Silva. “We are left without any money after paying rent, water, energy and then we are suffering for those thirty days until the next 28th of the month or so.”

The pandemic is sending unemployment higher around the globe. Outside the 27-country European Union and its 19 members that use the euro, Britain faces a sharp increase in unemployment as the government plans to replace a broad furlough support program at the end of October with a more limited version. Some economists expect the unemployment rate to double to 8% by year end. A lack of progress on reaching a new trade deal with the EU is only likely to worsen things.

In the U.S. , the jobless rate fell sharply in August by 1.8% to 8.4%, after a sharper increase during the spring. The U.S., which has less in the way of labor market support programs, saw unemployment spike as high as 14.7% in May, followed by a steep fall as businesses and states reopened.

The recession has in some cases accelerated painful change that existed before the pandemic, such as technological shifts in the auto industry. Automakers Daimler and Renault, airline Lufthansa, oil company Royal Dutch Shell and travel concern TUI have announced sweeping cost-cutting and job reductions.

Among the hardest hit are workers and small business owners in the services industries, many of whom are struggling for survival, and independent contractors and temporary workers.

Greek actor and theater director Aris Laskos hasn’t worked since early February. He received a one-off support check for 800 euros ($940) shortly after the country’s economy was placed in lockdown in the spring.

Greece recently emerged from a crippling financial crisis after spending most of the past decade in recession. Unemployment numbers are again rising fast, reaching 16.7% in the second quarter, with the numbers expected to worsen after government funding for furlough schemes runs out.

“Probably 90% of employees in the arts sector are unemployed,” said Laskos, who heads an actors' guild representing more than 2,500 professionals. Most members do not qualify for benefits due to the freelance nature of acting work.

“The arts sector is was the first to be locked down and is the last one still not opened yet,” Laskos said. “We are struggling, trying to cope with our lives. We have no insurance, and we cannot enter the unemployment system... Everything else is running: planes, ferries, restaurants, but not us.”

Alves reported from Lisbon. Derek Gatopoulos in Athens also contributed to this report.