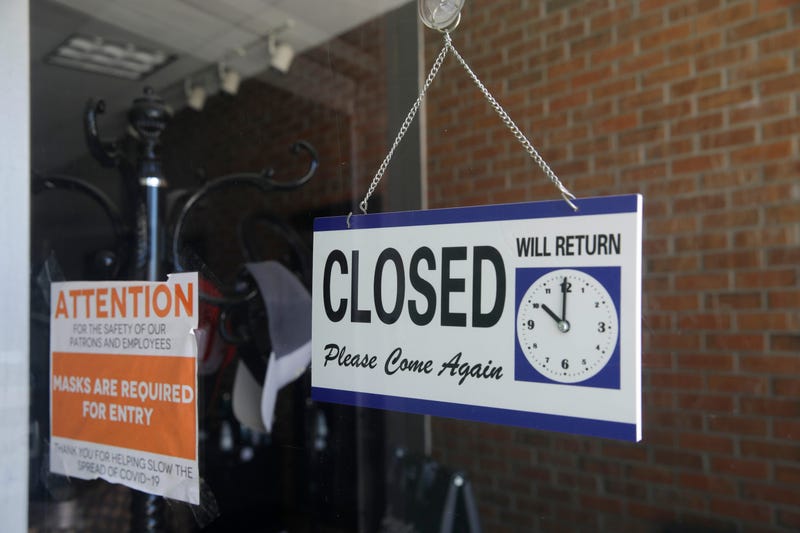 Photo credit FILE - In this July 18, 2020 file photo a closed sign hangs in the window of a barber shop in Burbank, Calif. A critical snapshot of the job market and the economy to be released Friday, Oct. 2, is expected to show a further deceleration in hiring as the nation’s viral caseload creeps higher just as financial aid from the government has faded. (AP Photo/Marcio Jose Sanchez, File)
By The Associated Press

WASHINGTON (AP) — A critical snapshot of the job market and the economy to be released Friday is expected to show a further slowdown in hiring as the nation's viral caseload creeps higher and as government financial aid has faded.

When the Labor Department issues its September jobs report, economists predict it will show a gain of 850,000, according to a survey by data provider FactSet. That would mark a third straight monthly slowdown, after June's 4.8 million job gain, July's 1.7 million and August's 1.4 million.

If the forecast for September proves accurate, it would mean that the economy has regained only slightly more than half the 22 million jobs that vanished when the pandemic flattened the economy in early spring. Should job gains continue to remain below 1 million a month, it would take until late 2021 or 2022 to recoup them all.

This will be the last jobs monthly report before the U.S. presidential election on Nov. 3. Polls consistently show that the economy is a key issue for voters.

So far, hiring has rebounded quickly compared with previous recessions. The gains have mainly reflected millions of temporarily laid-off Americans who were called back to work when retailers, restaurants, medical offices and other businesses reopened, at least partly, from their pandemic-induced shutdowns.

But slowing job growth has raised the specter of a prolonged downturn that feeds on itself and becomes harder to fully reverse. Many temporary layoffs are becoming permanent as hotels, restaurants, airlines, retailers, entertainment venues and other employers anticipate a longer slump than they initially expected. There is also growing fear of a resurgence of the virus, which would compound the threat.

The longer that laid-off workers fail to find jobs, the more likely it is that they will have to look for new work with new employers or in different occupations. Doing so can require additional training or education and take much longer to achieve than just returning to a previous job. The delay in landing a new job also erodes spending among the longer-term unemployed. The blow to consumer spending can force further job cuts as other businesses see their revenue decline and are forced to retrench.

A flood of government financial support had delayed such a vicious cycle in the spring and summer. A $600-a-week federal check that Congress provided in an economic aid package was made available to the unemployed in addition to each state’s jobless benefit. Government checks for $1,200 were also sent to most adults.

But the $600 benefit expired at the end of July. And while congressional negotiations, led by House Speaker Nancy Pelosi and Treasury Secretary Steven Mnuchin, continue, the prospect of a significant new aid package before the November elections looks far from certain.

Without additional economic assistance, incomes will likely drop in the coming months, said Gus Faucher, chief economist at PNC Financial. After-tax income in August was higher than in February, partly because millions of Americans were receiving jobless aid. But it has fallen in three of the past four months. And Faucher said he expects after-tax income to fall below pre-pandemic levels by the end of the year.

“That means it will be difficult for consumers to maintain their spending,” he said.

Overall wages and salaries are still 4% below pre-pandemic levels. In August, Americans' incomes fell 2.7%, the government reported Thursday. Income was slowed by a sharp drop in unemployment aid payments, reflecting the end of the $600-a-week federal benefit.

The economy does show some positive signs. Americans are rushing to buy homes, encouraged by near-record low mortgage rates. Pending home sales jumped in August to a record high. And consumer confidence rose in September, fueled by optimism among higher-income households, though it remains below pre-pandemic levels.

Some real-time indicators suggest that hiring has continued to improve. Kronos, a human resources and timekeeping software firm, says shifts worked at small companies picked up in September after having weakened in July and August.

Until a vaccine is developed, many economists say that hiring and economic growth won't fully recover. Restaurants, for example, rehired many employees over the summer as outdoor dining picked up. But as temperatures cool, business may fall off again, which could force many restaurants to lay off workers again. One in six restaurants have shut down because of the viral pandemic, the National Restaurant Association says.

In the meantime, many large companies have announced further layoffs in recent days.

Disney said this week that it’s cutting 28,000 jobs in California and Florida, a consequence of the damage it’s suffered from the viral outbreak and the shutdowns and attendance limits that were imposed in response. Allstate said it will shed 3,800 jobs — 7.5% of its workforce.

And tens of thousands of airline workers will lose their jobs this month as federal aid to the airlines expires. The airlines were barred from cutting jobs as long as they were receiving the government assistance. Two of them — American and United — announced that they would begin to furlough 32,000 employees after lawmakers and the White House failed to agree on a pandemic relief package that would extend the aid to airlines. And on Thursday, those furloughs began.

In addition, Marathon Petroleum, the Ohio refiner, is slashing 2,000 jobs. And the U.K.’s Royal Dutch Shell said it’s planning to cut up to 9,000 jobs worldwide by the end of 2022, though it's not known whether any are in the United States.