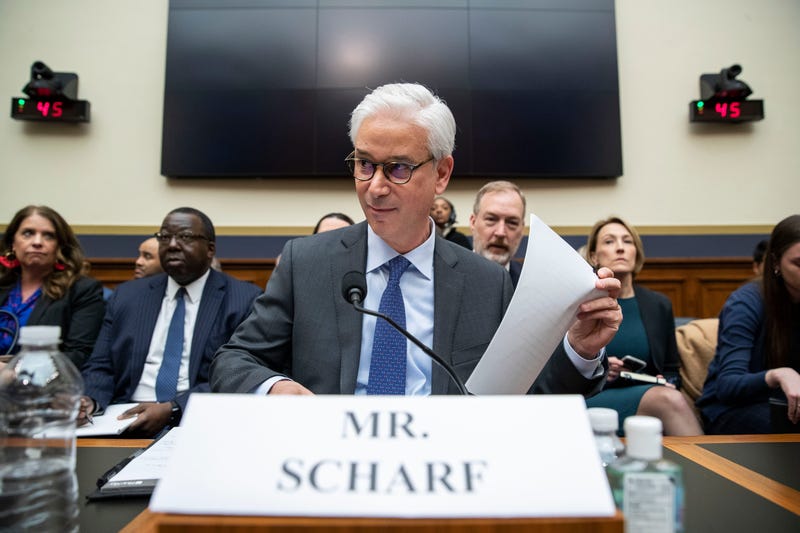 Photo credit FILE - In this March 10, 2020 file photo, Wells Fargo CEO and President Charles Scharf is seated before he testifies during a hearing of the House Financial Services Committee, on Capitol Hill, in Washington. Scharf apologized Wednesday, Sept. 23 for comments he made that dismissed concerns that the banking industry, which has a long history of racist behavior, wasn’t doing enough to promote and retain diverse talent. (AP Photo/Alex Brandon, File)
By The Associated Press

Scharf said that “there is a very limited pool of Black talent to recruit from” in corporate America. The memo to employees was written in June, but became public this week.

The comments and similar statements made in a Zoom meeting, reported by Reuters, led to an intense backlash in Washington and on social media.

“Perhaps it is the CEO of Wells Fargo who lacks the talent to recruit Black workers,” said Rep. Alexandra Ocasio-Cortez of New York, on Twitter.

Scharf on Wednesday said in a prepared statement that his comments reflected "my own unconscious bias.”

“There is no question Wells Fargo has to make meaningful progress to increase diverse representation,” he wrote. Wells has pledged to increase hiring of minority candidates, particularly through Black colleges and universities, as well as new anti-racism training programs at the bank.

Like much of the political and corporate world, the banking industry has had to face a reckoning for its role in the racial and economic inequality that faces Black and other minorities, in the wake of the death of George Floyd. Banks have announced changes to how they lend, and created new programs to spur economic development in communities of color.

Citigroup announced on the same day as Scharf's apology that it would direct $1 billion of the firm's capital toward closing the “racial wealth gap” in the United States. It would include $550 million in homeownership programs for communities of dollar, and hundreds of millions toward Black-owned businesses and suppliers.

But, despite those announcements, American banking is dominated by leadership that is largely white and male. None of the six big Wall Street banks have ever had a Black or female CEO. Citigroup a few weeks ago announced it would promote a woman to CEO next year, the first on Wall Street to do so. Banks large and small are still regularly cited for discriminatory practices, including allegations of redlining toward Black homebuyers.

Of the 964 named executives in the Russell 3000, only 71 of them are a racial or ethnic minority, according to Institutional Shareholder Services. Of those 71 individuals, nine are Black.

The last prominent African American to serve as CEO at a large financial services company was Kenneth Chenault, the former CEO of American Express. He retired in 2018. In an interview with The Associated Press at the time, Chenault called the lack of a pipeline to recruit and retain diverse talent “embarrassing” to the financial services industry.

Stanley O'Neal, the former CEO Merrill Lynch while it was still an independent company, is also Black. He resigned in 2007 during the firm's collapse.